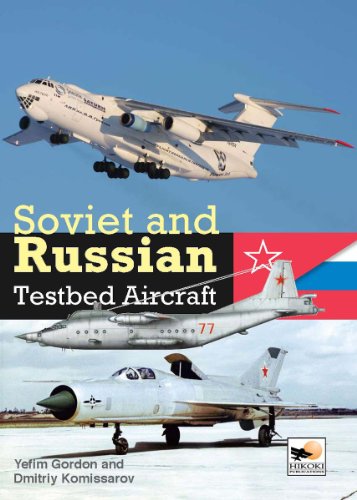 In both Soviet and modern Russia a multitude of assorted aircraft have been used for test and research purposes - primarily for verifying new avionics, systems, and weaponry. The use of systems being tested was not limited to aviation as aircraft were also utilized for other purposes including testing components of ballistic missile systems.

Soviet and Russian Testbed Aircraft investigates all categories of test and research aircraft: engine testbeds including the Il-76LL and Tu-16LL, radar testbeds such as the SL-18P based on the well-known Il-18 airliner; electronic warfare system testbeds such as the Il-76-11, and those for weapons, aerodynamics, and control configured vehicles like the LMK-2405.

In addition testbeds for landing gear, ejection seats such as the An-12M LL and Su-29KS, refueling systems, and helicopters modified as rotor system were created. Civil research aircraft, such as the An-12BPTs 'Tsiklon' weather research aircraft and IMARK geophysical survey aircraft are also given due attention. The MiG-27LL and MiG-29KVP aircraft used for testing conventional take-off and landing technologies during the Soviet CTOL aircraft carrier development program are also examined. Comprehensive details of each aircraft are coupled with information on the test centers from which these testbeds operate including the M. M. Gromov Flight Research Institute in Zhukovskiy, and the Air Force's 929th State Flight Test Centre in Akhtoobinsk.

More than 500 photographs, line drawings, close-up views of tell-tale 'bumps and bulges' and color profiles illustrate the aircraft providing a wealth of information for the historian and modeler alike.

Yefim Gordon is one of Russia's leading aviation writers and publishers. He is the author of many books on Soviet aviation and currently lives in Moscow.

Dmitriy Komissarov is a respected authority on Russian and Soviet aviation. He works in the publishing industry and lives in Moscow.