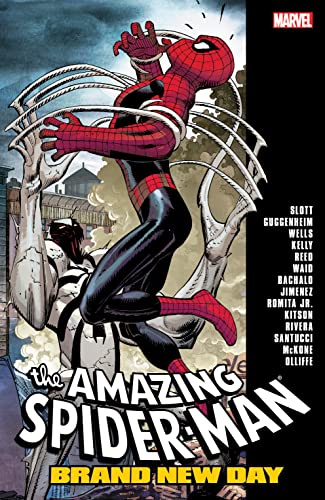 Will Spider-Man's Brand New Day be ruined by foes old, new, or a combination of the two? First, Spidey must survive Kraven's First Hunt - but this isn't the Kravinoff he knew. In fact, she might be even more lethal! Then, Spidey must face a Norman Osborn who has changed too - because this time Osborn has the force of the law behind him. And his dark version of order is maintained by the twisted Thunderbolts!

Dan Slott is a comics writer best known for his work on series including DC s ARKHAM ASYLUM: LIVING HELL, and, for Marvel, THE AVENGERS and THE AMAZING SPIDER-MAN.

Mark Waid, Alabama native and current Los Angeles resident, has written stories for every major comic book publisher, and his seminal graphic novel, KINGDOM COME, for DC Comics, is one of the best-selling graphic novels of all time. For BOOM! Studios, he has written bestselling graphic novels POTTER'S FIELD, INCORRUPTIBLE and the multiple Eisner and Harvey Award-nominated IRREDEEMABLE. Peter Krause is an American comic book artist. He is best known for his work on various DC Comics titles, most notably the Superman-related titles and THE POWER OF SHAZAM! with Captain Marvel and the Marvel Family. Krause, a graduate of the University of Minnesota, currently works as a freelance illustrator in Minnesota.