Items related to The Spiritual Origins of Eastern Europe: And the Future... 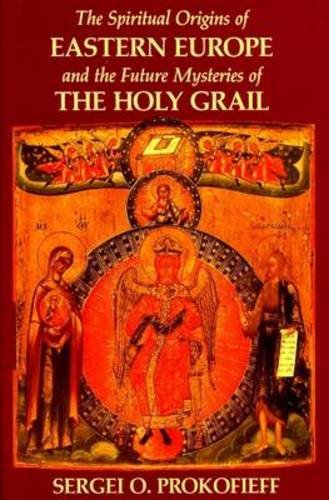 The Spiritual Origins of Eastern Europe: And the Future Mysteries of the Holy Grail

Title: The Spiritual Origins of Eastern Europe: And...

“And however paradoxical it may seem today, the ‘Grail mood’ is in the fullest sense to be found in Russia. And the future role that Russia will play in the sixth post-Atlantean epoch, a task of which I have so often had to speak, rests firmly upon this unconquerable ‘Grail mood’ in the Russian people.” ―Rudolf Steiner (Nov. 3, 1918)

Although Eastern Europe has been part of Christian humanity for more than a thousand years, its task and spiritual identity remain a mystery, the answer to which cannot be found unless we look behind outer historical events to the spiritual, meta-historical dimensions of history. This momentous work, breathtaking in its scope and detail, represents just such a penetrating, esoteric study of Eastern Europe in the light of Rudolf Steiner’s spiritual research.

Prokofieff shows how, from the earliest times, the future “conscience of humanity” flowed from hidden mystery centers in Hibernia to the eastern Slavic peoples. As a result, qualities of “compassion, patience, and willingness for sacrifice” developed in their souls, creating a truly Christian “Grail mood.” Despite incalculable suffering―from the persecutions by the Mogul hordes of the thirteenth century to the Bolshevik experiment of the twentieth century―this quality has become an unconquerable force in the depths of their being.

In illuminating the maya of outer history, Prokofieff reveals the forces that have been at work to hinder the progress and future intentions of humankind. Those adversarial forces have created a “karma of materialism” that the eastern Slavic peoples have taken upon themselves out of their exalted willingness for sacrifice.

Will we be able to use the present opportunity granted by this sacrifice to fulfill the primary purposes of the present cultural epoch? Serious study of this book―intended for students of spiritual science―can lead to a profound awakening to the challenges that face humankind today.

Sergei O. Prokofieff (1954-2014) was born in Moscow, where he studied fine arts and painting at the Moscow School of Art. At an early age he encountered the work of Rudolf Steiner and quickly realized that his life would be dedicated to the Christian path of esoteric knowledge. He wrote his first book, Rudolf Steiner and the Founding of the New Mysteries, while living in Soviet Russia, and it was published in English in 1994. After the fall of Communism, he helped establish the Anthroposophical Society in Russia. In 2001, he became a member of the Executive Council of the General Anthroposophical Society at the Goetheanum in Switzerland. More than 30 of his books have been translated into English. Sergei Prokofieff passed away in Dornach, Switzerland.