Items related to The Stalingrad Cauldron: Inside the Encirclement and...

Home Frank Ellis The Stalingrad Cauldron: Inside the Encirclement and Destruction...
Stock Image 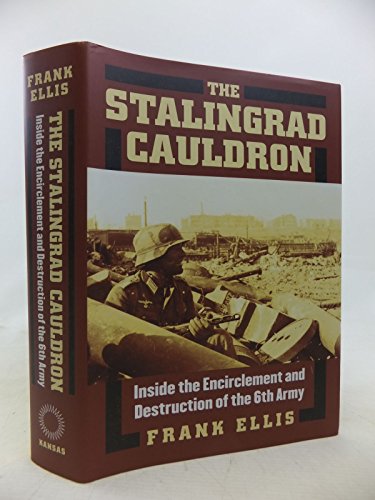 The Stalingrad Cauldron: Inside the Encirclement and Destruction of the 6th Army (Modern War Studies)

First Edition: the printing numerals on the copyright page are a full line beginning with 1. AS NEW. No wear to the binding. No distortion of the book from reading or improper shelving. Pages are tight and clean with no marks. No name of previous owner. No odor. AS NEW dust jacket shows no wear, no sun fading. DJ in an archival protector. Bookseller Inventory # MP17-1888A

Title: The Stalingrad Cauldron: Inside the ...

The encirclement of the German 6th Army at Stalingrad in mid-November 1942 and its final collapse in February 1943 was a signature defeat for Hitler, as more than 100,000 of his soldiers were marched off into captivity. Frank Ellis tackles this oft-told tale from the unique perspective of the German officers and men trapped inside the Red Army's ever-closing ring of forces. This approach makes palpable the growing desperation of an army that began its campaign confident of victory but that long before the end could see how hopeless their situation had become.

Highlighting these pages are three previously unpublished German army division accounts, translated here for the first time by Ellis. Each of these translations follows the combat experiences of a specific division—the 76th Infantry, the 94th Infantry, and the 16th Panzer—and take readers into the cauldron (or Kessel) that was Stalingrad. Together they provide a ground-level view of the horrific fighting and yield insights into everything from tactics and weapons to internal disputes, the debilitating effects of extreme cold and hunger, and the Germans' astonishing sense of duty and the abilities of their junior leaders.

Along with these first-hand accounts, Ellis himself takes a new and closer look at a number of fascinating but somewhat neglected or misunderstood aspects of the Stalingrad cauldron including sniping, desertion, spying, and the fate of German prisoners. His coverage of sniping is especially notable for new insights concerning the duel that allegedly took place between Soviet sniper Vasilii Zaitsev and a German sniper, Major Konings, a story told in the film Enemy at the Gates (2001). Ellis also includes an incisive reading of Oberst Arthur Boje's published account of his capture, interrogation, and conviction for war crimes, and explores the theme of reconciliation in the works of two Stalingrad veterans, Kurt Reuber and Vasilii Grossman.

Rich in anecdotal detail and revealing moments, Ellis's historical mosaic showcases an army that managed to display a vital resilience and professionalism in the face of inevitable defeat brought on by its leaders. It makes for compelling reading for anyone interested in one of the Eastern Front's monumental battles.

Frank Ellis is the author of Vasiliy Grossman: The Genesis and Evolution of a Russian Heretic; From Glasnost to the Internet: Russia’s New Infosphere; and The Damned and the Dead: The Eastern Front through the Eyes of Soviet and Russian Novelists. A former academic and veteran of the British army, he currently lives in the United Kingdom.

We are the oldest used/ rare book store in Rockford, Il. Founded in 1958. Located in ca 1900 dutch colonial house. Three floors crammed with books, ephemera, and magazines. Voted best used bookstore by Rockford Magazine. We have a second location at Booth 88, East State Antique Mall, 5301 E. State St. (Bus Rte US20) Rockford, IL. Listed in Used Book Lovers Guide to the Midwest. Store features general stock of 12,000 volumes with specialization in Americana, militaria, and old technology. We are incorporated in the State of Illinois. File # D 6173-879-7.


All books are subject to prior sale in our store. We accept checks, Visa and Mastercard. Purchases may be returned within ten days of receipt in the same condition as received. Returns may be for any reason, but prior notice is requested.histor Shipping and handling costs for books sold within USA are $4.00 for 1st book, $2.00 per additional. This is for USPS media mail. Priority mail and foreign shipments at approximate cost, plus handling fee.