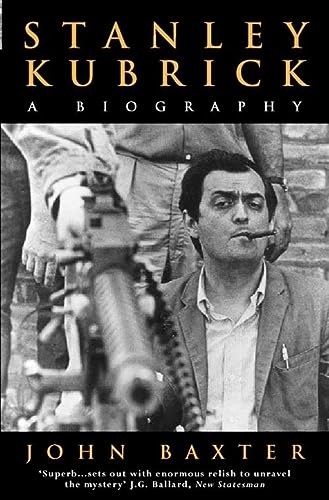 AbeBooks Seller Since May 4, 2006 Seller Rating

The most complete account yet of one of the most original and stimulating film-makers of the post-war years: Paths of Glory, Dr Strangelove, Lolita, 2001: A Space Odyssey, A Clockwork Orange, The Shining, Barry Lindon, Full Metal Jacket ...A biography of this pre-eminent cultural figure is long overdue. Few film-makers have managed to maintain their mystique over forty years; Kubrick succeeded by preparing his films for years, so that each distilled the essence of the zeitgeist. To the generation of the 1950s, he was one of the few directors to achieve, with Paths of Glory, the dignity and stature of the European cinema in an American film. To 1960s audiences, he's the man who made both Dr Strangelove, the ultimate anti-war movie, and the counter-culture classic 2001: A Space Odyssey. In the 1970s he created that archetypal hymn to urban violence, A Clockwork Orange. In the 1980s, he put Stephen King on screen in The Shining. In continental Europe especially, Kubrick is regarded as one of the handful of great living film-makers. Born in the Bronx in 1928 of Central European stock, Kubrick still lives in moody seclusion in Borehamwood, where he bought a house soon after moving to the UK in 1961.

For decades, the films of Stanley Kubrick have staked out a claim at the core of our cultural landscape. In the 1950s, he was one of the few American film makers to achieve the gravitas of European cinema with Paths of Glory. To 1960s audiences, he was the man who made both Dr. Strangelove, the influential anti-war movie, and 2001: A Space Odyssey, the counterculture favorite. In the 1970s he created his hymn to urban violence, A Clockwork Orange, and in the 1980s he distilled the nature of private madness and collective insanity with The Shining and Full Metal Jacket. His first film of the 1990s will be Eyes Wide Shut starring Tom Cruise. Yet little is known of the man and the influence exerted by his private life on his public art. Born in the Bronx, Kubrick has lived since 1961 in seclusion in rural England. From in-depth interviews with a range of people who have known the man best, spanning from his childhood to the present, John Baxter now presents the most complete account available of Kubrick's life. The conflicts with partners and stars, the failure to make Napoleon, the failed marriages and broken friendships, the use and abuse of writers and other collaborators - this detailed and complex study addresses all these to reveal a man who, above all, has dared to live life on his terms.

We are an online retailer.