Items related to Steps on the Path to Enlightenment: A Commentary on...

Home Sopa, Geshe Lhundub Steps on the Path to Enlightenment: A Commentary on Tsongkhapa?s...
Stock Image 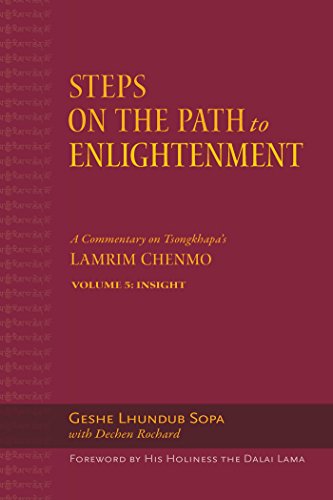 Steps on the Path to Enlightenment: A Commentary on Tsongkhapa?s Lamrim Chenmo. Volume 5: Insight

Title: Steps on the Path to Enlightenment: A ...

The final installment of the Steps on the Path to Enlightenment series examines the nature of reality with a master class in Buddhist Middle Way philosophy and meditation.

The late Geshe Sopa was a refugee monk from Tibet sent to the United States by the Dalai Lama in 1963. He became a professor at the University of Wisconsin, training a generation of Western Buddhist scholars, and was a towering figure in the transmission of the Buddhism to the West. In this fifth and final volume of his commentary on Lama Tsongkhapa’s masterwork on the graduated steps of the Buddhist path, Geshe Sopa explains the practice of superior insight, or wisdom, the pinnacle of the bodhisattva's perfections. All the Buddhist practices are for the purpose of developing wisdom, for it is wisdom that liberates from the cycle of suffering. All other positive actions, from morality to deep states of meditation, have no power to liberate unless they are accompanied by insight into the nature of reality. With unparalled precision, Geshe Sopa unpacks this central principle with scholarly virtuosity, guiding the reader through the progressive stages of realization.

Geshe Lhundub Sopa (1923–2015) trained as a scholar monk at Sera Je Monastic University in Lhasa and was debate partner for the Dalai Lama in 1959 before fleeing his homeland of Tibet in the wake of the Chinese Communist Occupation. After arriving in the United States in 1963, he taught first in New Jersey before moving to Madison, Wisconsin, in 1967 to teach at the university. Eventually becoming a full professor, he trained a generation of Western scholars. He also founded Deer Park Buddhist Center in Oregon, Wisconsin, which hosted the Dalai Lama's first Kalachakra initiation in the West in 1981. Geshe Sopa passed away at Deer Park in 2015.