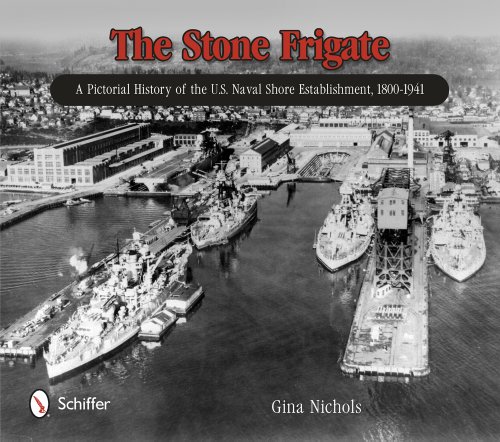 "This collection of historic images documents the history of the U.S. Naval Shore Establishment from its creation to World War II and its historic role supporting the fleet. The U.S. Navy began with the approach to house, train, and support sailors and the fleet on wooden ships of the line. However, its first Secretary of the Navy, Benjamin Stoddert, realized in 1798 the advantages of a shore establishment and requested funds for the first six navy yards located in Boston, New York, Philadelphia, Washington, D.C., Norfolk, and Portsmouth. The Stone Frigate is a pictorial account of the activities of personnel, machines, and equipment used in the creation and development of the U.S. Naval Shore Establishment from its first beginnings as six small navy yards to the cusp of World War II and the massive global expansion the U.S. was about to initiate.

Gina Nichols is the archivist for the U.S. Navy Seabee Museum in Port Hueneme, California. Nichols, an adjunct professor for the Department of History at California State University Northridge, teaches several archival management courses. She has authored three books: The Seabees at Port Hueneme (2006); The Seabees at Gulfport (2007); and The Navy at Point Mugu (2011) published by Arcadia Publishing. Nichols has master’s and baccalaureate degrees in history from California State University Northridge with concentrations in United States history and archival management. She is currently working on a bachelor’s degree in Multimedia Design. Nichols is listed in Who’s Who of the World (2009), Who’s Who in America (2009, 2011, 2013), Who’s Who of American Women (2009), and Who’s Who of Emerging Leaders (2007).