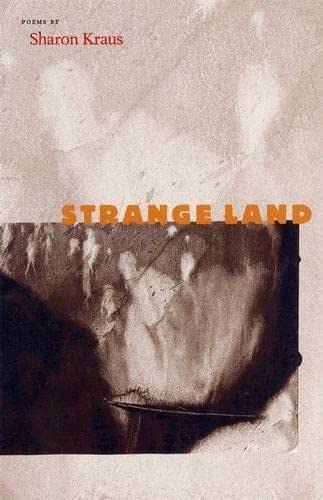 Strange Land, Sharon Krau's second book of poems, chronicles the life of a woman embarking on marriage and contemplating the possibility of motherhood. The poems wrestle with the narrator's childhood, fraught with violence and ambivalence, and work to reconcile her past with the course of her future. From the Ice Child of the Andes to a pigeon lost in a New York City subway station, the imagery driving the poems is constantly surprising, and is underpinned with humor and reverence. These are rigorous poems that take nothing for granted - every emotion is interrogated, every resolution is contingent.

A National Poetry Series Finalist for the year 2000

"Brilliant, darkly brilliant. The poems are deep-rooted in difficult terrain that Kraus excavates like an archaeologist and plants like a gardener. They reach from harm to healing and the risk of hope, full of mental action that enriches the ordinary world. I delight in their sturdy promise, their airy music."

"When the Melodians adapted the 137th Psalm to produce their immensely popular reggae ballad, 'Rivers of Babylon,' they gave new voice to the anguish of exile and the longing for home. 'How can we sing King Alfa song / In a strange land?' they sang. What they occluded for their popular audience was the exile's concomitant search for revenge: 'O daughter of Babylon,' the Psalmist continues, 'Happy shall be he, that taketh and dasheth thy little ones against the stones.' Sharon Kraus, who takes the title of her book from this same Psalm, courageously remembers the two sides of suffering. The speaker of these poems has herself been the child who is dashed against stones. And yet, or rather, and therefore, these are love poems, each and every one. They are fierce. Their heartening discovery is the 'syntax of repair'."

"Strange Land is as compelling a love story as Heloise and Abelard, even though it has a happy ending. Kraus takes us on a journey through her marriage and what we come away with is renewed faith in the ability of intimacy to reshape our lives. She overcomes her fear of abandonment without the psychological babble. We gain greater understanding of the power of marriage, which gave us this great book."