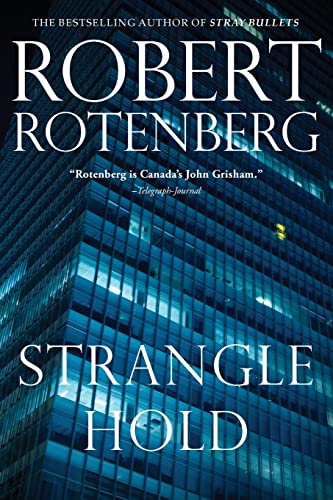 Synopsis: Fact or fiction? Current events in the City of Toronto echo the plot of Robert Rotenberg’s latest legal thriller Stranglehold. Everyone is saying he predicted the future for Toronto’s mayor. Read it and find out!

Ripped from the headlines, Stranglehold is bestselling author Robert Rotenberg’s most shocking book yet, featuring Detective Ari Greene in the fight of his life.

It is just after Labour Day and the city is kicking into gear. All eyes are on the hotly contested election for Toronto’s next mayor and crime is the big issue. Greene is no stranger to the worst of what the city has to offer, but even he is unprepared for what happens next when he stumbles upon a horrific homicide.

In one nightmare moment his world is flipped upside down. Soon Greene is pitted against his young protégé, Daniel Kennicott, who arrests him for first-degree murder. Tied down on house arrest as he awaits his trial, Greene has to find a way to clear his name, and also must face some very hard truths: that he didn’t really know the people he believed in most; that there are unseen forces at work prepared to see him take the fall; and most of all, that he should never underestimate the price people will pay for love.

Eerily reminiscent of the scandal surrounding the current Toronto mayor, Stranglehold is Rotenberg’s fourth gripping mystery set on the streets and in the courtrooms of the city, capturing audiences with his masterful knowledge of the intricacies of the criminal justice system and feel for the emotions that make people tick.

About the Author: Robert Rotenberg is one of Toronto’s top criminal lawyers and the author of several bestselling novels, including Old City Hall, The Guilty Plea, Stray Bullets, and Stranglehold. He lives in Toronto. Visit him at RobertRotenberg.com or follow him @RobertRotenberg.

Book Description Touchstone. Paperback. Condition: Good. A copy that has been read, but remains in clean condition. All pages are intact, and the cover is intact. The spine may show signs of wear. Pages can include limited notes and highlighting, and the copy can include previous owner inscriptions. An ex-library book and may have standard library stamps and/or stickers. At ThriftBooks, our motto is: Read More, Spend Less. Seller Inventory # G1476759626I3N10

Book Description Scribner, 2013. Paperback. Condition: VERY GOOD. Pages are intact and are not marred by notes or highlighting, but may contain a neat previous owner name. The spine remains undamaged. Seller Inventory # 1476759626_abe_vg

Book Description Scribner, 2013. Paperback. Condition: GOOD. Has little wear to the cover and pages. Contains some markings such as highlighting and writing. Seller Inventory # 1476759626_abe_gd

Book Description Scribner, 2013. Condition: Good. A+ Customer service! Satisfaction Guaranteed! Book is in Used-Good condition. Pages and cover are clean and intact. Used items may not include supplementary materials such as CDs or access codes. May show signs of minor shelf wear and contain limited notes and highlighting. Seller Inventory # 1476759626-2-4

Book Description Touchstone, 2013. Condition: Good. Former Library book. Shows some signs of wear, and may have some markings on the inside. Seller Inventory # GRP78482849

Shipping: US$ 14.36
From United Kingdom to U.S.A.
Destination, rates & speeds