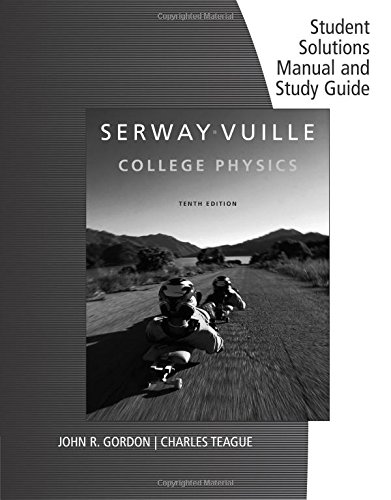 AbeBooks Seller Since May 17, 2007 Seller Rating

Usually ships within 24 hours in quality packaging. Satisfaction guaranteed. Books have varying amounts of wear and highlighting. Please note that items may contain writing and/or highlighting and may not include CDs, access cards, or other supplementary material. We are not able to ship internationally. Your satisfaction is guaranteed! Items ship in quality packaging within 3 business days. Bookseller Inventory # 8800034459926

For Chapters 1-14, this manual contains detailed solutions to approximately twelve problems per chapter. These problems are indicated in the textbook with boxed problem numbers. The manual also features a skills section, important notes from key sections of the text, and a list of important equations and concepts.

Raymond A. Serway is Professor Emeritus at James Madison University. He earned his doctorate at Illinois Institute of Technology. Among his accolades, he received an honorary doctorate degree from his alma mater, Utica College, the 1990 Madison Scholar Award at James Madison University (where he taught for 17 years), the 1977 Distinguished Teaching Award at Clarkson University and the 1985 Alumni Achievement Award from Utica College. As a Guest Scientist at the IBM Research Laboratory in Zurich, Switzerland, Dr. Serway worked with K. Alex Müller, who shared the 1987 Nobel Prize in Physics. He also was a visiting scientist at Argonne National Laboratory, where he collaborated with his mentor and friend, the late Sam Marshall. In addition to this text, Dr. Serway is the co-author of COLLEGE PHYSICS, Eleventh Edition; PRINCIPLES OF PHYSICS, Fifth Edition; ESSENTIALS OF COLLEGE PHYSICS; MODERN PHYSICS, Third Edition; and the high school textbook PHYSICS, published by Holt McDougal. He has published more than 40 research papers in the field of condensed matter physics and has given more than 60 presentations at professional meetings.

Chris Vuille (PhD, University of Florida) is associate professor of physics at Embry-Riddle Aeronautical University, the world's premier institution for aviation higher education. While he has taught courses at all levels, including postgraduate, his primary interest is the teaching of introductory physics courses. He conducts research in general relativity, astrophysics, cosmology, and quantum theory and was a participant in a special three-year NASA grant program where he studied properties of neutron stars. His work has appeared in many scientific journals and in ANALOG SCIENCE FICTION/SCIENCE FACT magazine. He is the coauthor of COLLEGE PHYSICS, Eleventh Edition and ESSENTIALS OF COLLEGE PHYSICS.


We guarantee the condition of every book as it's described on the Abebooks web
sites. If you're dissatisfied with your purchase (Incorrect Book/Not as Described/Damaged) or if the order hasn't arrived, you're eligible for a refund within 30 days of the estimated delivery date.

If you've changed your mind about a book that you've ordered, please use the Ask bookseller a question link to contact us and we'll respond within 2 business days. The returned merchandise must be postmarked within 30 days...


Orders typically ship in 1 business day. If your book order is heavy or oversized, we may contact you to let you know extra shipping is required.