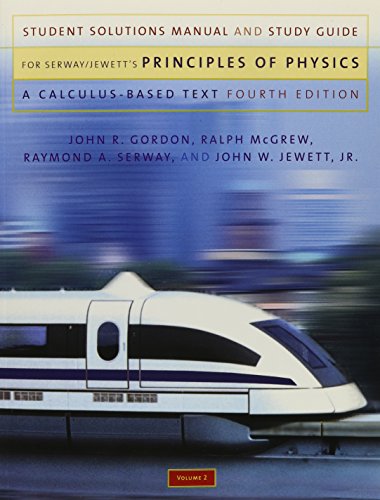 Written by John R. Gordon and Ralph McGrew, with Raymond Serway and John Jewett, the two-volume manual features detailed solutions to 20 percent of the end-of-chapter problems from the text. This manual also contains lists of important equations and concepts, other study aids, and answers to selected end-of-chapter questions.

Raymond A. Serway received his doctorate at Illinois Institute of Technology and is Professor Emeritus at James Madison University. In 2011, he was awarded an honorary doctorate degree from his alma mater, Utica College. He received the 1990 Madison Scholar Award at James Madison University, where he taught for 17 years. Dr. Serway began his teaching career at Clarkson University, where he conducted research and taught from 1967 to 1980. He was the recipient of the Distinguished Teaching Award at Clarkson University in 1977 and the Alumni Achievement Award from Utica College in 1985. As Guest Scientist at the IBM Research Laboratory in Zurich, Switzerland, he worked with K. Alex Müller, 1987 Nobel Prize recipient. Dr. Serway also was a visiting scientist at Argonne National Laboratory, where he collaborated with his mentor and friend, the late Sam Marshall. In addition to PHYSICS FOR SCIENTISTS AND ENGINEERS, Dr. Serway is the coauthor of PRINCIPLES OF PHYSICS, Fifth Edition; COLLEGE PHYSICS, Ninth Edition; ESSENTIALS OF COLLEGE PHYSICS; MODERN PHYSICS, Third Edition; and the high school textbook PHYSICS, published by Holt McDougal. In addition, Dr. Serway has published more than 40 research papers in the field of condensed matter physics and has given more than 60 presentations at professional meetings. Dr. Serway and his wife Elizabeth enjoy traveling, playing golf, fishing, gardening, singing in the church choir, and especially spending quality time with their four children, nine grandchildren, and a recent great-grandson.

John W. Jewett, Jr., earned his undergraduate degree in physics at Drexel University and his doctorate at Ohio State University, specializing in optical and magnetic properties of condensed matter. Dr. Jewett began his academic career at Richard Stockton College of New Jersey, where he taught from 1974 to 1984. He is currently Emeritus Professor of Physics at California State Polytechnic University, Pomona. Through his teaching career, Dr. Jewett has been active in promoting science education. In addition to receiving four National Science Foundation grants, he helped found and direct the Southern California Area Modern Physics Institute (SCAMPI) and Science IMPACT (Institute for Modern Pedagogy and Creative Teaching). Dr. Jewett's honors include the Stockton Merit Award at Richard Stockton College in 1980, selection as Outstanding Professor at California State Polytechnic University for 1991-1992, and the Excellence in Undergraduate Physics Teaching Award from the American Association of Physics Teachers (AAPT) in 1998. In 2010, he received an Alumni Lifetime Achievement Award from Drexel University in recognition of his contributions in physics education. He has given over 100 presentations both domestically and abroad, including multiple presentations at national meetings of the AAPT. Dr. Jewett is the author of THE WORLD OF PHYSICS: MYSTERIES, MAGIC, AND MYTH, which provides many connections between physics and everyday experiences. In addition to his work on PHYSICS FOR SCIENTISTS AND ENGINEERS, he is the coauthor for PRINCIPLES OF PHYSICS, Fifth Edition, as well as GLOBAL ISSUES, a four-volume set of instruction manuals in integrated science for high school. Dr. Jewett enjoys playing keyboard with his all-physicist band, traveling, and collecting antique quack medical devices that can be used as demonstration apparatus in physics lectures. Most importantly, he relishes spending time with his wife Lisa and their children and grandchildren.