Items related to Studies in the History of Machine Tools 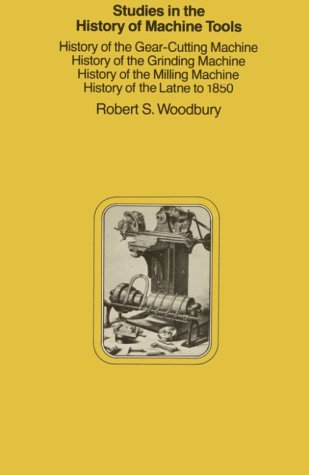 Studies in the History of Machine Tools

Title: Studies in the History of Machine Tools

This work was originally published as four separate books; their titles, and reviewers' comments, are given below:

History of the Gear-Cutting Machine: A Historical Study in Geometry and Machines

"The book represents an overwhelmingly well-done job of reducing a great mass of material—scholarly references, patents, catalogs, engineering and trade journals, and machines themselves—into a logical story of development. Written with zest and relish, this vivid account presents a wealth of unusual information. The illustrations are particularly good, for many of them come from previously untapped sources."
—Technology and Culture

History of the Grinding Machine: A Historical Study in Tools and Precision Production

"From the polished artifacts of prehistoric times Mr. Woodbury traces the development of methods, abrasives, and the machine tools which interdependently contributed to the advanced grinding techniques used today. Many fine illustrations."
—The Tool Engineer

History of the Milling Machine: A Study in Technical Development

History of the Lathe to 1850: A Study in the Growth of a Technical Element of an Industrial Economy

"Woodbury, who teaches the history of technology at the Massachusetts Institute of Technology, is at work on a history of machine design which promises to alter our perspectives not only in his special field but in general cultural history.... His present history of the lathe (to about 1850) absorbs the entire previous literature and goes far beyond it."
—Lynn White, Jr.

"The screw cutting lathe, the planer and the shaper were the classic machine tools of the industrial revolution. The milling, grinding and gear cutting machines as well as the turret lathe belong to the next generation of machine tools which were developed largely in the United States in the second half of the nineteenth century in response to the demands of industries working on the interchangeable principle. [Woodbury's work is] concerned with this second flowering of a small but crucial industry which economic historians have too long neglected.... Mr. Woodbury shows very well how these machine tools responded to the demands of particular industries."
—Business History


Payment accepted via credit card, check/money order, or PayPal. Credit cards accepted via ABEbooks or PayPal ONLY--please do not send us your credit card information, as we have no way of processing it ourselves. If paying via PayPal, please remember to include shipping and handling. Our PayPal account is bookbooth@usa.com.

International orders must be pay...


Payment accepted via credit card, check/money order, or PayPal. Credit cards accepted via ABEbooks or PayPal ONLY -- please do not send us your credit card information, as we have no way of processing it ourselves. Our PayPal account is bookbooth@usa.com. If paying via PayPal, please remember to include shipping & handling charges. Checks and money orders are also accepted; please make them payable to: C.M. Casciani, 441 W. Bagley Rd. #173, Berea OH 44017. Library and institutional orders welcome; please email us if you require any special handling. International orders must be payable in US dollars. SHIPPING & HANDLING: all books shipped in USA via USPS; Media Mail 7-14 business days for delivery, $4.00 for first book - $1.50 each additional book; or, Priority Mail 2-4 business days for delivery, $6.00 first book - $2.50 each additional book. Returns for reasonable grading of condition; email us prior to return for shipping instructions.