Items related to Stuff: The Things The World Is Made Of

Home Ivan Amato Stuff: The Things The World Is Made Of
Stock Image 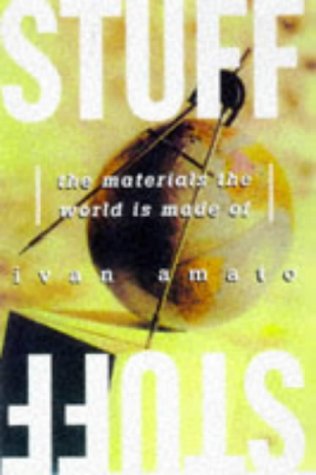 Stuff: The Things The World Is Made Of

Title: Stuff: The Things The World Is Made Of

From plastics to smart materials to never-before-seen composites, scientists have transformed the raw materials of the wilderness into the stuff of the modern world. Now, award-winning journalist Ivan Amato explores this fascinating science.Prehistory was stuck in the Stone Age partly because it lacked the scientific know-how to smelt iron from rocky ores. The Industrial Revolution owed its birth to the geniuses who figured out how to make large amounts of steel. Postwar America can thank or hang in effigy John Wesley Hyatt, who gave us plastics. And twenty-first-century America may well rise, or fall, depending on how far ahead it remains in the development of smart materials. The most important factor in technological progress today is the ability of the materials scientist to take apart and reconfigure the physical stuff of the world into substances that have never existed naturally on Earth.Much more than a history of the material sciences, Stuff brims with interviews with cutting-edge experts in the field, many of whom are building new materials literally atom by atom, and describes such astounding achievements as artificial diamonds created from peanut butter and how nanotechnologists are building new-age, state-of-the-art machines no thicker than a few hundred atoms. Compelling and informative, it gives readers a marvelous glimpse into the modern world of technology and the smart materials that are at the forefront of tomorrow's breakthroughs in computers, military weaponry, electronics, and more.

"Stuff, stuff, everywhere stuff": Ivan Amato will make you appreciate how much ingenuity, history, and subtlety goes into even the most apparently mundane human-produced materials, such as paper or steel. Then he will astonish you by describing the Stuff of the future, the deliberate creations of today's materials scientists: Buckyballs, synthetic diamonds, designs crafted at the atomic level, self-healing materials, and biomimetics. A revolution is just beginning that is "comparable in scope and importance to the beginning of the scientific method."