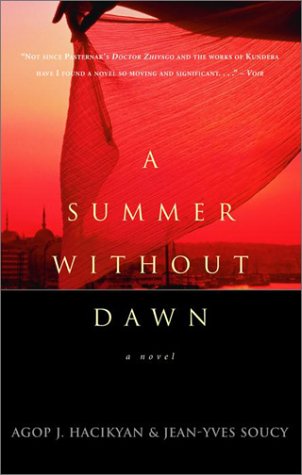 A Summer Without Dawn

Synopsis: A Summer Without Dawn is an epic family saga that unfolds against the true story of the Armenians deported from the Ottoman Empire and massacred during the First World War.

In the summer of 1915, days after the government orders the deportation of the Armenians, the charismatic Armenian journalist Vartan Balian is separated from his family and imprisoned by politicians hoping to silence him. After a daring escape, he becomes a fugitive and embarks on an odyssey across the vast empire. Not only is he running for his life; he is also searching for his wife, Maro, and their young son, Tomas. Forced into one of the deportee convoys headed for the Syrian desert, their numbers thinning every day, Maro and Tomas are saved from certain death when the Ottoman governor overseeing their deportation shelters them in the cloistered splendour of his palace, where Maro is reluctantly drawn into his harem’s web of betrayals and alliances. In the four years that will pass before they are reunited, the Balians will each confront the calamities of war and the secrets of their own heart.

With settings ranging from the exotic opulence of a Turkish harem and the cosmopolitan streets of Constantinople, to the blistering desolation of the Syrian desert, this sweeping novel immerses the reader in a time, a place, and a political moment that have rarely, if ever, been portrayed in the pages of a novel. A Summer Without Dawn is a rich tapestry of lives, a compelling human drama about a family swept up in one of history’s darkest moments, and a moving portrait of a people’s unbreakable will to survive.

From the Back Cover: “Not since Pasternak’s Doctor Zhivago and the works of Kundera has a novel seemed to me as moving and as indispensable.”
–Voir

“[A work of] compelling beauty and importance.”
–Hour

“A gripping read....A fascinating and very cinematic novel, written from the gut.”
–The Independent (U.K.)

2. A Summer Without Dawn

Book Description McClelland & Stewart. Paperback. Condition: Fair. A readable copy. All pages are intact, and the cover is intact. Pages can include considerable notes-in pen or highlighter-but the notes cannot obscure the text. At ThriftBooks, our motto is: Read More, Spend Less. Seller Inventory # G0771037538I5N00