Items related to Summer for the Gods: The Scopes Trial and America's... 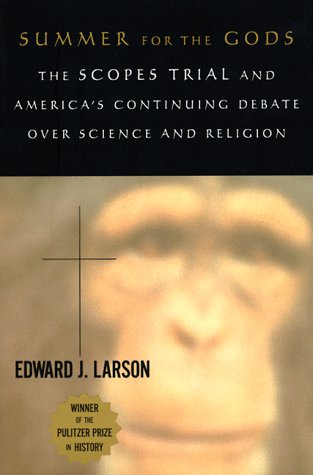 Summer for the Gods: The Scopes Trial and America's Continuing Debate over Science and Religion

## FINE book is clean and square. Paperback. First Paperback Edition. First printing. Spine uncreased. Covers flat. Minimal shelf wear. There is minor highlighting on a few pages, else As New. No marks in or on book except as noted. NOT A REMAINDER. Not ex library. 318 pages. Index. Appears as a new, unused book despite a little highlighting. Fine. Bookseller Inventory # 000279

Title: Summer for the Gods: The Scopes Trial and ...

The Scopes "Monkey Trial" marked a watershed in our national discussion of science and religion. In addition to symbolizing the clash between evolutionist and creationist camps, the trial helped shape the development of both popular religion and constitutional law in the United States, serving as a precedent for more recent legal and political battles. Pairing new archival material from both the Bryan prosecution and the Darrow defense with Larson's keen historical and legal analysis, Summer for the Gods offers a fresh interpretation of a pivotal event in American history.

If you haven't seen the film version of Inherit the Wind, you might have read it in high school. And even people who have never heard of either the movie or the play probably know something about the events that inspired them: The 1925 Scopes "monkey trial," during which Darwin's theory of evolution was essentially put on trial before the nation. Inherit the Wind paints a romantic picture of John Scopes as a principled biology teacher driven to present scientific theory to his students, even in the teeth of a Tennessee state law prohibiting the teaching of anything other than creationism. The truth, it turns out, was something quite different. In his fascinating history of the Scopes trial, Summer for the Gods, Edward J. Larson makes it abundantly clear that Truth and the Purity of Science had very little to do with the Scopes case. Tennessee had passed a law prohibiting the teaching of evolution, and the American Civil Liberties Union responded by advertising statewide for a high-school teacher willing to defy the law. Communities all across Tennessee saw an opportunity to put themselves on the map by hosting such a controversial trial, but it was the town of Dayton that came up with a sacrificial victim: John Scopes, a man who knew little about evolution and wasn't even the class's regular teacher. Chosen by the city fathers, Scopes obligingly broke the law and was carted off to jail to await trial.

What happened next was a bizarre mix of theatrics and law, enacted by William Jennings Bryan for the prosecution and Clarence Darrow for the defense. Though Darrow lost the trial, he made his point--and his career--by calling Bryan, a noted Bible expert, as a witness for the defense. Summer for the Gods is a remarkable retelling of the trial and the events leading up to it, proof positive that truth is stranger than science.

Our listings on AbeBooks feature only quality books at fair prices. They are mostly first editions or signed copies, most in Fine or better condition. Our emphasis is on scholarly books, especially items that are out of print.


We guarantee the condition of every book as it's described on the Abebooks web sites. If you're dissatisfied with your purchase (Incorrect Book/Not as Described/Damaged) or if the order hasn't arrived, you're eligible for a refund within 30 days of the estimated delivery date. If you've changed your mind about a book that you've ordered, please use the Ask bookseller a question link to contact us and we'll respond within 2 business days. European Union required contact information: Philip Nowers...


Orders usually ship within 2 business days. Shipping costs assume Media Mail/Parcel Post rates and are based on books weighing 2.2 LB, or 1 KG, as packed. If your book order is heavy or oversized, we may contact you to let you know extra shipping is required. We welcome E-mail requests for advance rate quotes on unusual or heavy items before ordering; also on any shipments outside of the United States. Please use the Ask Bookseller a Question link.