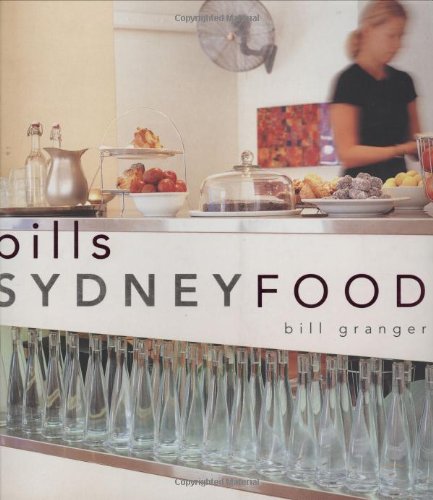 Synopsis: "In celebration of 10 years in print comes an updated collector's edition of Bill Granger's bestselling first cookbook Bills Sydney Food. With new iconic Sydney photography and a fresh design in a new hardback format this title is sure to capture a new audience, tempt die-hard fans who will need a revised copy and prove the perfect gift or souvenir for visitors to Sydney. Bills Sydney Food contains all the must-have recipes from Bill's original restaurant in inner-city Darlinghurst - the signature scrambled eggs, ricotta hotcakes with honeycomb butter, and even chocolate chip cookies."

About the Author: Bill Granger presents food that is visually appealing, relaxed, delicious, fresh and full of flavour. A self-taught cook, he runs the three Sydney landmark 'bills' restaurants. In addition to being the author of six bestselling cookbooks, Bill has been a contributor to many food publications in Australia and internationally. In 2004 Bill launched his debut television series 'bills food' on The LifeStyle Channel. The series was acquired by the BBC in the UK and 22 other countries. A second series of 'bills food' premiered in late 2006 and has since screened internationally, and 'bills holiday', Bill's third TV series, screened on The LifeStyle Channel in early 2009.

Book Description Paperback. Condition: Good. A slight tan to the page edges. Good condition is defined as: a copy that has been read but remains in clean condition. All of the pages are intact and the cover is intact and the spine may show signs of wear. The book may have minor markings which are not specifically mentioned. Most items will be dispatched the same or the next working day. Seller Inventory # mon0017613825

Book Description Paperback. Condition: Used; Good. **SHIPPED FROM UK** We believe you will be completely satisfied with our quick and reliable service. All orders are dispatched as swiftly as possible! Buy with confidence!. Seller Inventory # mon0000301544

Book Description Paperback. Condition: Very Good. Bill'S Sydney Food This book is in very good condition and will be shipped within 24 hours of ordering. The cover may have some limited signs of wear but the pages are clean, intact and the spine remains undamaged. This book has clearly been well maintained and looked after thus far. Money back guarantee if you are not satisfied. See all our books here, order more than 1 book and get discounted shipping. . Seller Inventory # 7719-9780864119919

Book Description Paperback. Condition: Very Good. Shipped within 24 hours from our UK warehouse. Clean, undamaged book with no damage to pages and minimal wear to the cover. Spine still tight, in very good condition. Remember if you are not happy, you are covered by our 100% money back guarantee. Seller Inventory # 6545-9780864119919

Book Description Condition: Very Good. Ships from the UK. Used book that is in excellent condition. May show signs of wear or have minor defects. Seller Inventory # 5888381-6

Book Description Condition: Good. Ships from the UK. Used book that is in clean, average condition without any missing pages. Seller Inventory # 3956476-20

Shipping: US$ 61.82
From United Kingdom to U.S.A.
Destination, rates & speeds