Items related to TELL NO ONE 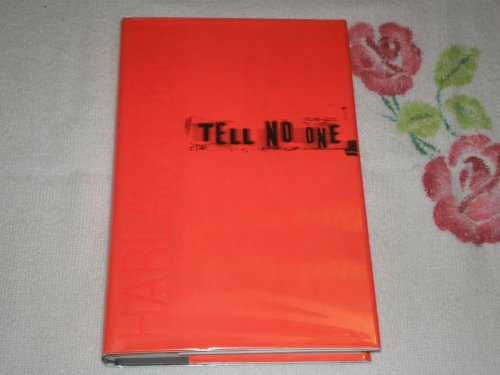 Signed by author on title page in black fountain ink. As new, first edition, first printing, Eight years ago David Beck was knocked unconscious and left for dead, and his wife Elizabeth was kidnapped and murdered. For the next eight years Dr Beck re lived the horror of what happened that day every day of his life. Then one afternoon, he receives an anonymous e mail telling him to log on to a certain web site at a certain time, using a code that only he and his wife knew. The screen opens onto a web cam and it is Elizabeth's image he sees. Is it a practical joke? But as Beck tries to find out if Elizabeth is truly alive and what really happened the night she disappeared, the FBI are trying to pin Elizabeth's murder on him, and everyone he turns to seems to end up dead.TELL NO ONE was nominaed for the Edgar, Macavity, and Anthony Awards. in fine, mylar-protected dust jacket. {{Not emainder-marked or price-clipped} M91. Bookseller Inventory # 019253

Title: TELL NO ONE

For Dr. David Beck, the loss was shattering. And every day for the past eight years, he has relived the horror of what happened. The gleaming lake. The pale moonlight. The piercing screams. The night his wife was taken. The last night he saw her alive.

Everyone tells him it's time to move on, to forget the past once and for all. But for David Beck, there can be no closure. A message has appeared on his computer, a phrase only he and his dead wife know. Suddenly Beck is taunted with the impossible -- that somewhere, somehow, Elizabeth is alive.

Beck has been warned to tell no one. And he doesn't. Instead, he runs from the people he trusts the most, plunging headlong into a search for the shadowy figure whose messages hold out a desperate hope.

But already Beck is being hunted down. He's headed straight into the heart of a dark and deadly secret -- and someone intends to stop him before he gets there.

David Beck has rebuilt his life since his wife's murder eight years ago, finishing medical school and establishing himself as a pediatrician, but he's never forgotten the woman he fell in love with in second grade. And when a mysterious e-mail arrives on the anniversary of their first kiss, with a message and an image that leads him to wonder whether Elizabeth might still be alive, Beck will stop at nothing to find the truth that's eluded him for so many years. A powerful billionaire is equally determined to make sure his role in her disappearance never comes to light, even if it means destroying an innocent man.

In David Beck, Harlan Coben, the author of the popular series starring sports agent Myron Bolitar (Darkest Fear et al.) has created a protagonist who shares many of Bolitar's best qualities--he's a decent, generous, gentle guy whose loyalty to those he loves is unquestionable. So when he discovers that people he was close to may be responsible not only for Elizabeth's murder but also the "accidental" death of his father, Beck's sense of betrayal is as understandable to the reader as his uncharacteristically violent reaction. Coben is a skillful storyteller with a gift for creating likable characters caught up in circumstances that illuminate their complex emotional lives and deep humanity. This should be the thriller that breaks this talented writer out of the mystery genre and earns him the recognition he deserves. --Jane Adams