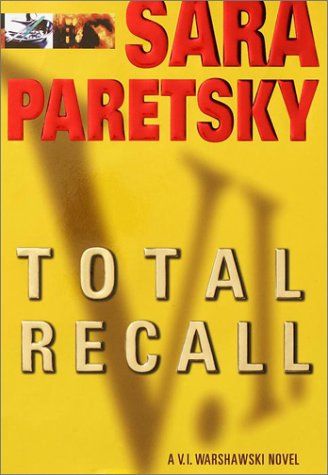 The bestselling V.I. Warshawski novels have dazzled readers and earned the acclaim of critics everywhere. “V.I. Warshawski rules,” writes Newsweek, crowning her “the most engaging woman in detective fiction.” Of V.I.’s creator, the Chicago Tribune says “Sara Paretsky has no peer.”

Now Paretsky brings her incomparable storytelling brilliance to her most powerful Warshawski novel yet. Total Recall follows the Chicago P.I. on a road that winds back more than fifty years — and into an intricate maze of wartime lies, heartbreaking secrets, and harrowing retribution.

For V.I., the journey begins with a national conference in downtown Chicago, where angry protesters are calling for the recovery of Holocaust assets. Replayed on the evening news is the scene of a slight man who has stood up at the conference to tell an astonishing story of a childhood shattered by the Holocaust — a story that has devastating consequences for V.I.’s cherished friend and mentor, Lotty Herschel.

Lotty was a girl of nine when she emigrated from Austria to England, one of a group of children wrenched from their parents and saved from the Nazi terror just before the war broke out. Now stunningly — impossibly — it appears that someone from that long-lost past may have returned.

With the help of a recovered-memory therapist, Paul Radbuka has recently learned his true identity. But is he who he claims to be? Or is he a cunning impostor who has usurped someone else’s history ... a history Lotty has tried to forget for over fifty years?

As a frightened V.I. watches her friend unravel, she sets out to help in the only way she can: by investigating Radbuka’s past. Already working on a difficult case for a poor family cheated of their life insurance, she tries to balance Lotty’s needs with her client’s, only to find that both are spiraling into a whirlpool of international crime that stretches from Switzerland and Germany to Chicago’s South Side.

As the atrocities of the past reach out to engulf the living, V.I. struggles to decide whose memories of a terrible war she can trust, and moves closer to a chilling realization of the truth — a truth that almost destroys her oldest friend.

With fierce emotional power, Sara Paretsky has woven a gripping and morally complex novel of crime and punishment, memory and illusion. Destined to become a suspense classic, Total Recall proves once again the daring and compelling genius of Sara Paretsky.

Chicago private investigator V.I. Warshawski returns in an exceptionally well-plotted thriller that focuses attention on V.I.'s longtime friend Lotty Herschel. In a handful of chapters that punctuate the contemporary narrative, the Austrian-born physician tells her own story. More than just a device to draw the many threads of this complex novel together, Lotty's history illuminates the depth and complexity of a character that readers of Sara Paretsky's many books-- like V.I. herself--only thought they knew.

At a conference on the recovery of Holocaust assets, a man named Paul Radbuka surfaces, claiming to be part of the past that Lotty left buried in war-torn Europe half a century ago. The aging Lotty is emotionally shattered. She has never talked to V.I. about those years following her escape from Austria--her youth as an orphaned teenager in England and the brilliant medical career that ultimately brought her to America. But Radbuka's claims have such a dramatic effect on her that V.I. feels compelled to investigate him. Radbuka's early life in a concentration camp has recently come back to him, aided by the ministrations of a recovered-memory therapist. Now he's demanding that Lotty and her friend Max, another émigré, acknowledge his connection to them, something neither is prepared to do. Is Radbuka really who he claims to be? And if he's the impostor Lotty says he is, why is she so terrified of him?

V.I.'s efforts to pin down Radbuka's identity dovetail with another case, that of a client with a beef against an insurance company that's trying to keep the state legislature from passing a Holocaust Asset Recovery Act. It's a little too tidy for coincidence, but since it gives Paretsky a chance to show off her knowledge of Chicago politics, the reader is delighted to accept it. While it's Lotty's voice that brings the dead to life and the past into the present, it's V.I.'s dogged perseverance and abiding affection for her friend that drive this powerful, brilliantly executed novel to a conclusion. This is one of Paretsky's strongest outings in years. --Jane Adams