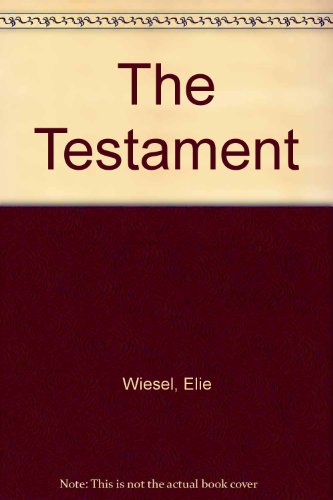 Synopsis: Writing in prison, a Russian Jewish poet recounts the hopes, frustrations, and ultimate futility of his attempt to reconcile the beliefs of his Jewish heritage and the Communist ideal he has pursued

From the Inside Flap: , 1952, Russia's greatest Jewish writers were secretly executed by Stalin. In this remarkable blend of history and imagination, Paltiel Kossover meets the same fate but, unlike his real-life counterparts, he is permitted to leave a written testament. From a Jewish boyhood in pre-revolutionary Russia, Paltiel traveled down a road that embraced Communism, only to return to Russia and discover a Communist Party that had become his mortal enemy. Two decades later, Paltiel's son, Grisha, reads this precious record of his father's life and finds that it illuminates the shadowed planes of his own.

Passionate and fierce, this story of a father's legacy to his son revisits some of the most dramatic events of our century, and confirms yet again Elie Wiesel's stature as "a writer of the highest moral imagination" (San Francisco Chronicle).

Book Description Random House Publishing Group. Mass Market Paperback. Condition: Good. A copy that has been read, but remains in clean condition. All pages are intact, and the cover is intact. The spine may show signs of wear. Pages can include limited notes and highlighting, and the copy can include previous owner inscriptions. At ThriftBooks, our motto is: Read More, Spend Less. Seller Inventory # G0553208101I3N00