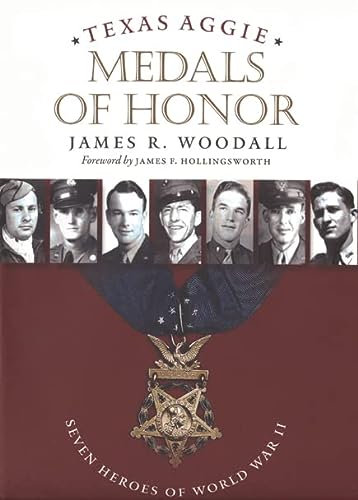 Every Medal of Honor represents a story of gallantry, courage, and sacrifice. Conceived in the early 1860s, the Medal of Honor, awarded “in the name of the Congress of the United States,” has been presented to more than 3,000 members of the United States armed forces. Seven of the 464 Medals of Honor awarded during World War II went to Texas Aggies.

Author James R. Woodall, a 1950 graduate of Texas A&M University and a decorated veteran of the Vietnam War, carried out a dedicated search of archives, family collections, and scores of other resources to gather, for the first time, the complete stories of these seven courageous men.

Texas Aggie Medals of Honor will undoubtedly be of great interest to former students of Texas A&M University, members of the Corps of Cadets, and others associated with the university and its distinguished tradition of military training and service. But the book will also hold great appeal, in the words of one advance reader, “to those interested in the nation’s highest award for valor and the individual stories of ordinary men who did extraordinary things when confronted by life-threatening situations in combat.”

“ . . . a fast moving narrative of short, thoughtful portraits of the lives of seven World War II Texas Aggie Medal of Honor recipients. . . has meaning for readers both inside and outside the Texas Aggie Nation, and they will certainly grasp Woodall’s admiration for these seven men and appreciate his tenacious research into their histories.”—Southwestern Historical Quarterly

JAMES R. WOODALL ’50 holds, among other awards, the Silver Star and three Bronze Stars. Following his tenure as commandant of cadets at Texas A&M University, Colonel Woodall retired from the U.S. Army and presently makes his home in College Station.