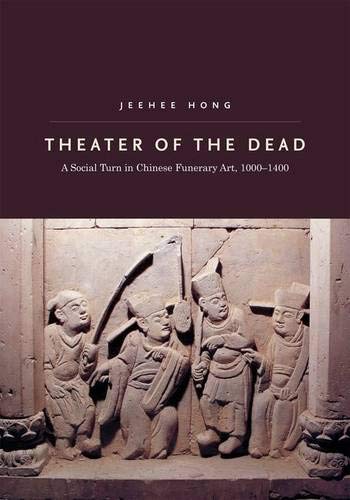 In eleventh-century China, both the living and the dead were treated to theatrical spectacles. Chambers designed for the deceased were ornamented with actors and theaters sculpted in stone, molded in clay, rendered in paint. Notably, the tombs were not commissioned for the scholars and officials who dominate the historical record of China but affluent farmers, merchants, clerics―people whose lives and deaths largely went unrecorded. Why did these elites furnish their burial chambers with vivid representations of actors and theatrical performances? Why did they pursue such distinctive tomb-making? In Theater of the Dead, Jeehee Hong maintains that the production and placement of these tomb images shed light on complex intersections of the visual, mortuary, and everyday worlds of China at the dawn of the second millennium.
Assembling recent archaeological evidence and previously overlooked historical sources, Hong explores new elements in the cultural and religious lives of middle-period Chinese. Rather than treat theatrical tomb images as visual documents of early theater, she calls attention to two largely ignored and interlinked aspects: their complex visual forms and their symbolic roles in the mortuary context in which they were created and used. She introduces carefully selected examples that show visual and conceptual novelty in engendering and engaging dimensions of space within and beyond the tomb in specifically theatrical terms. These reveal surprising insights into the intricate relationship between the living and the dead. The overarching sense of theatricality conveys a densely socialized vision of death. Unlike earlier modes of representation in funerary art, which favored cosmological or ritual motifs and maintained a clear dichotomy between the two worlds, these visual practices show a growing interest in conceptualizing the sphere of the dead within the existing social framework. By materializing a “social turn,” this remarkable phenomenon constitutes a tangible symptom of middle-period Chinese attempting to socialize the sacred realm.
Theater of the Dead is an original work that will contribute to bridging core issues in visual culture, history, religion, and drama and theater studies.

From the Author: Jeehee Hong is an Assistant Professor in the Department of Art and Music Histories at Syracuse University. Her research focuses on the ritual art and visual culture of middle-period China (9th-14th centuries), and has worked on themes as diverse theatricality in painting, shifting roles of tomb portraits, cultural patterns of emerging local elite, temporality in tomb imageries, and new conceptions and practices of "spirit articles" in middle-period funerary art. Her research has been funded by the Andrew W. Mellon Foundation, Asian Cultural Council, and, most recently, American Council of Learned Society.

Book Description University of Hawaii Press, 2016. Condition: Good. A+ Customer service! Satisfaction Guaranteed! Book is in Used-Good condition. Pages and cover are clean and intact. Used items may not include supplementary materials such as CDs or access codes. May show signs of minor shelf wear and contain limited notes and highlighting. Seller Inventory # 082485537X-2-4

Book Description University of Hawaii Press, 2016. Hardcover. Condition: VERY GOOD. Pages are intact and are not marred by notes or highlighting, but may contain a neat previous owner name. The spine remains undamaged. Supplemental materials are not guaranteed with any used book purchases. Seller Inventory # 082485537X_abe_vg