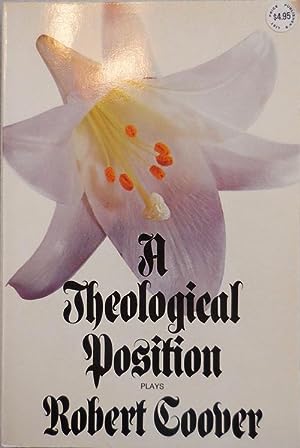 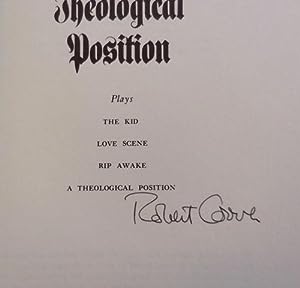 We're sorry; this specific copy is no longer available. Here are our closest matches for A Theological Position (Signed ).

Simultaneous first paperbound edition of this collection of plays by Coover. A fine example in bound photo-illustrated wrappers. 172 pp. SIGNED by the author on the title page. Bookseller Inventory # 23145

Book Description 3 pp. 6 x 4 inches, first page unevenly toned. 5 Gordon Street, 26 November 1878. "Yet I fancy you do not refuse to go with me to the position which alone my Address professes to reach: viz. that the modern formulas of the litterateurs are no real equivalents for the faith wich they supersede." James Martineau (1805-1900) was a Unitarian minister and educator, and a widely influential theologian and philosopher. As lecturer and Principal at Manchester New College, he was for many years responsible for training ministerial students. Seller Inventory # 19059

Shipping: US$ 7.78
From United Kingdom to U.S.A.
Destination, rates & speeds

2. Francis Crawford Burkitt, Norris Professor of Divinity at the University of Cambridge.] Autograph Letter Signed ('F. C Burkitt') to 'Mr Bushell' [W. D. B ushell, Chaplain of Harrow], on his election as professor, regarding his theological position.

Book Description On letterhead of St Keynes Cambridge. 14 November, 1905. 4pp., 12mo. Bifolium. In good condition, lightly aged. A long and interesting letter, describing in detail his position on his election as Cambridge Professor of Divinity. He begins by thanking him for writing, adding: 'You can imagine that we are feeling just now quite beside ourselves.' He agrees with him that 'the Professorship is a great responsibility to a layman'. He continues: 'The Heads have elected me, knowing that their choice represents a definite endorsement of what may be called in newspapers "free, advanced criticism". I am therefore all the more anxious not to be rash and as much as possible to gain the sympathy of those who have the welfare of the Christian Church at heart.' In his opinion 'the real danger is that Cambridge tends to become predominantly secular with a little stream of religion running through it, but not covering the ground'. He has occasionally 'heard complaints that the Theological Students the ordinary ones, not perhaps the clever ones get a little Biblical criticism, but nothing to carry them through in the world'. He has confidence that the 'Old Testament part' is safe in the hands of Professor of Hebrew R. H. Kennett, 'but what is wanted is to apply the Christian part of theological learning to present day problems a kind of marriage between erudition & religion'. He is uncertain of his own ability to 'do anything towards this', 'but at least I see the crying need of translating the formulae of Christian theology into the language which is used to-day out of doors, outside the Church doors. The work won't be done by drawing a ring-fence round the N. T. or round the Gospels or even round the Person of our Lord.' He has confidence that if 'Christianity is fundamentally true, it will digest & transform the current philosophy as it did the Aristotelianism of the Middle Ages.' He thanks Bushell's wife on his own behalf and that of 'Perch', adding that he has 'written over ninety letters, besides drawing up a long Report to the V. C. on Palaeographical Teaching in this University'. Seller Inventory # 21047