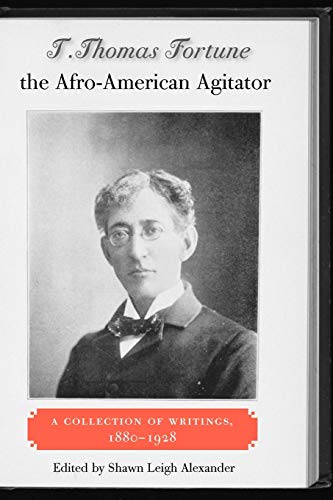 T. Thomas Fortune, the Afro-American Agitator: A Collection of Writings, 1880-1928 (New Perspectives on the History of the South)

Born into slavery, T. Thomas Fortune was known as the dean of African American journalism by the time of his death in the early twentieth century. The editorship of three prominent black newspapers--the New York Globe, New York Freeman, and New York Age--provided Fortune with a platform to speak against racism and injustice.

For nearly five decades his was one of the most powerful voices in the press. Contemporaries such as Ida B. Wells, W.E.B. Du Bois, and Booker T. Washington considered him an equal, if not a superior, in social and political thought. Today's histories often pass over his writings, in part because they are so voluminous and have rarely been reprinted. Shawn Leigh Alexander's anthology will go a long way toward rectifying that situation, demonstrating the breadth of Fortune's contribution to black political thought at a key period in American history.

Shawn Leigh Alexander is an assistant professor in the department of African and African American studies at the University of Kansas.

Shawn Leigh Alexander is an assistant professor in the department of African and African American studies at the University of Kansas.