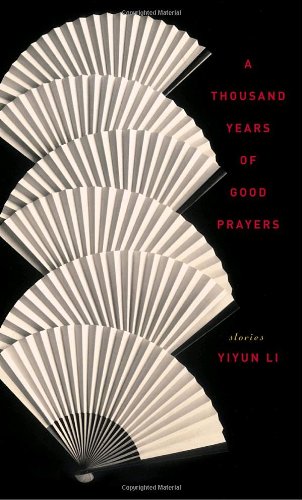 A Fine book in a Fine dust jacket. First Edition (stated)/ First Printing (with full number line including the "1"). Winner of the 2005 Frank O'Connor International Short Story Award, the 2006 Hemingway Foundation/PEN Award, Guardian First Book Award, and California Book Award for first fiction. This the first book by the author of The Vagrants and Gold Boy, Emerald Girl is SIGNED, Inscribed and dated by the author on the full title page. Book is near pristine - clean, unmarked, tight and square. Jacket has very light, if any, shelf wear else fully intact, bright and clean with no markings or tears. A solid, highly collectible copy over all of acclaimed author's first work. Signed first printings of this work are becoming rare. Bookseller Inventory # 001589

Brilliant and original, A Thousand Years of Good Prayers introduces a remarkable new writer whose breathtaking stories are set in China and among Chinese Americans in the United States. In this rich, astonishing collection, Yiyun Li illuminates how mythology, politics, history, and culture intersect with personality to create fate. From the bustling heart of Beijing, to a fast-food restaurant in Chicago, to the barren expanse of Inner Mongolia, A Thousand Years of Good Prayers reveals worlds both foreign and familiar, with heartbreaking honesty and in beautiful prose.

“Immortality,” winner of The Paris Review’s Plimpton Prize for new writers, tells the story of a young man who bears a striking resemblance to a dictator and so finds a calling to immortality. In “The Princess of Nebraska,” a man and a woman who were both in love with a young actor in China meet again in America and try to reconcile the lost love with their new lives.

“After a Life” illuminates the vagaries of marriage, parenthood, and gender, unfolding the story of a couple who keep a daughter hidden from the world. And in “A Thousand Years of Good Prayers,” in which a man visits America for the first time to see his recently divorced daughter, only to discover that all is not as it seems, Li boldly explores the effects of communism on language, faith, and an entire people, underlining transformation in its many meanings and incarnations.

These and other daring stories form a mesmerizing tapestry of revelatory fiction by an unforgettable writer.

Yiyun Li grew up in Beijing and attended Peking University. She came to the United States in 1996 to study medicine and started writing two years later. After receiving a master’s degree in immunology from the University of Iowa, she attended the Iowa Writers’ Workshop, where she received an MFA. Li is a recipient of The Paris Review’s Plimpton Prize for new writers. Her stories have been published in The New Yorker, The Paris Review, Glimmer Train, and Prospect. She lives in Oakland, California with her husband and their two sons.