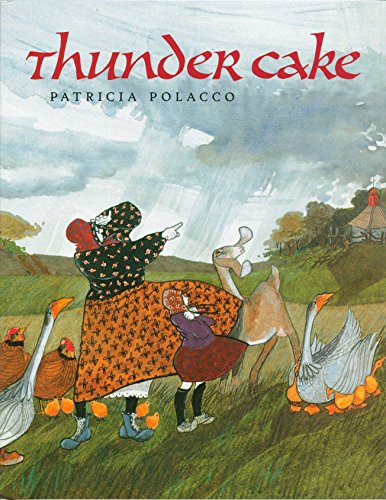 Inscribed on title page, "To.(signed) Patricia Polacco 2015". This is an unused hardcover book with a dust jacket that show minor shelfwear. A grandmother and her granddaughter bake a cake together as a thunder storm is approaching. Size: 9 x 11 1/2. Bookseller Inventory # 5356-68

A loud clap of thunder booms, and rattles the windows of Grandma's old farmhouse. "This is Thunder Cake baking weather," calls Grandma, as she and her granddaughter hurry to gather the ingredients around the farm. A real Thunder Cake must reach the oven before the storm arrives. But the list of ingredients is long and not easy to find . . . and the storm is coming closer all the time!

Reaching once again into her rich childhood experience, Patricia Polacco tells the memorable story of how her grandma--her Babushka--helped her overcome her fear of thunder when she was a little girl. Ms. Polacco's vivid memories of her grandmother's endearing answer to a child's fear, accompanied by her bright folk-art illustrations, turn a frightening thunderstorm into an adventure and ultimately . . . a celebration!

Whether the first clap of thunder finds you buried under the bedcovers or happily anticipating the coming storm, Thunder Cake is a story that will bring new meaning and possibility to the excitement of a thunderstorm.

"I was born in Lansing, Michigan in 1944. Soon after my birth I lived in Williamston, Michigan and then moved onto my grandparents farm in Union City, Michigan.

"I lived on the farm with my mom and Grandparents until 1949. That is when my Babushka (my grandmother) died and we prepared to move away from Michigan. I must say that living on that little farm with them was the most magical time of my life...and that my Babushka and other grandparents were some of the most inspirational people in my life.

"My parents were divorced when I was 3, and both my father and mother moved back into the homes of their parents. I spent the school year with my mother, and the summers with my dad. In both households I was the apple of my grandparents' eyes! I would say that these relationships with my grandparents have most definitely influenced my life and my work. You probably have noticed that in almost every book that I write there is a very young person who is interacting with an elderly person. Personally, I feel that this is the most valuable experience of my life....having the wonder of knowing both children and elderly people.

"The respect that I learned as a very young person certainly carried over into my life in later years. I have always like hearing stories from these folks. My genuine curiosity for the wonder of living a very long life prepared me to accept the declining years of my own parents.

"To get back to the farm in Union City...this place was so magical to me that I have never forgotten it! This was the place where I heard such wonderful stories told...this was the place that a real meteor fell into our font yard...that very meteorite is now our family headstone in the graveyard here in Union City.

"Did I tell you that I now live in Union City? This is after living in Oakland, California for almost 37 years. But, you see, every year I'd come back to Michigan to see my Dad and family.

"In 1949 we left the farm to move, first to Coral Gables, Florida. I lived there with my Mom and my brother, Richard, for almost 3 years. Then we moved to Oakland, California. I remained there for most of my young life on into my adulthood. We lived on Ocean View Drive in the Rockridge District. What I loved the most about this neighborhood is that all of my neighbors came in as many colors, ideas and religions as there are people on the planet. How lucky I was to know so many people that were so different and yet so much alike.

"It is on Ocean View that I met my best friend, Stewart Grinnell Washington. We are best friends to this day! He has a younger brother, Winston and three sisters; Jackie, Terry and Robin. When I was a student in elementary school I wasn't a very good student. I had a terrible time with reading and math. As a matter of fact, I did not learn how to read until I was almost 14 years old. Can you imagine what it was like to see all my friends do so well in school and I wasn't! I thought I was dumb. I didn't like school because there was this boy that always teased me and made me feel even dumber. When I was fourteen, it was learned that I have a learning disability. It is called dyslexia. I felt trapped in a body that wouldn't do what everybody else could do. That was when one of my hero's, my teacher, found what was wrong with me and got me the help I needed to succeed in school. Of course, now that I am an adult, I realize that being learning disabled does not mean DUMB AT ALL! As a matter of fact, I have learned that being learning disabled only means that I cannot learn the way most of you do. As a matter of fact, most learning disabled children are actually GENIUSES! Once I learned how to read and caught up with the rest of my fellow students, I did very well.

"I went on to University, majored in Fine Art, then went on to do a graduate degree and even ended up with a Ph.D. in Art History. For a time I restored ancient pieces of art for museums. I eventually became the mother of two children, Steven and Traci, and devoted much of my days to their education and upbringing.

"I did not start writing children's books until I was 41 years old. Mind you the "art" has always been there for me most of my life. Apparently one of the symptoms of my disability in academics is the ability of draw very, very well. So drawing, painting and sculpture has always been a part of my life even before I started illustrating my books. The books were quite a surprise, really. Mind you, I came from a family of incredible storytellers. My mother's people were from the Ukraine and Russia...my father's people were from Ireland. My extended family,(Stewart's family) were from the bayous of Louisiana...also great story tellers. When you are raised on HEARING stories.....NOT SEEING THEM, you become very good at telling stories yourself. So at the age of 41 I started putting stories that I told down on paper and did drawings to help illustrate them...I guess the rest is history.

"I have enjoyed a wonderful career of writing books for children . Who could have guessed that little girl that was having such a tough time in school would end up an illustrator and author. Children and adults alike ask me where I get my ideas...I get them from the same place that you do....MY IMAGINATION... I would guess the reason my imagination is so fertile is because I came from storytelling and, WE DID NOT OWN A T.V.!!!!!!!!! You see, when one is a writer, actor, dancer, musician; a creator of any kind, he or she does these things because they listen to that "voice" inside of them. All of us have that "voice". It is where all inspired thoughts come from....but when you have electronic screens in front, of you, speaking that voice for you... it DROWNS OUT THE VOICE! When I talk to children and aspiring writers, I always ask them to listen to the voice, turn off the T.V. and

"Now that I have moved back to Union City I am intending to open my house and community and invite people to come there to take part in writing seminars, story telling festivals, literature conferences and various events that celebrate children's literature."

Born Patricia Ann Barber in Lansing, Michigan, to parents of Russian and Ukrainian descent on one side and Irish on the other, Patricia Polacco grew up in both California and Michigan. Her school year was spent in Oakland, California, and summers in her beloved Michigan. She describes her family members as marvelous storytellers. "My fondest memories are of sitting around a stove or open fire, eating apples and popping corn while listening to the old ones tell glorious stories about their homeland and the past. We are tenacious traditionalists and sentimentalists.... With each retelling our stories gain a little more Umph!"

Studying in the United States and Australia, Patricia Polacco has earned an M.F.A. and a Ph. D. in art history, specializing in Russian and Greek painting, and iconographic history. She is a museum consultant on the restoration of icons. As a participant in many citizen exchange programs for writers and illustrators, Patricia Polacco has traveled extensively in Russia as well as other former Soviet republics. She continues to support programs that encourage Russo-American friendships and understanding. She is also deeply involved in inner-city projects here in the U.S. that promote the peaceful resolution of conflict and encourage art and literacy programs.

The mother of a grown son and a daughter, Patricia Polacco currently resides in Michigan, where she has a glorious old farm that was built during the time of Lincoln.

We are a mail-order book business specializing in high quality books in a wide variety of fields. We emphasize the accurate description of books, fair pricing and excellent customer service. Customer satisfaction is guaranteed or the price of the book is promptly refunded.


Please order with confidence directly through Abebooks. Your credit card order will be securely processed, and we will ship the order out by the next business day.
EA Lombardo
PO Box 6713
Longmont, CO 80501
303-594-8627