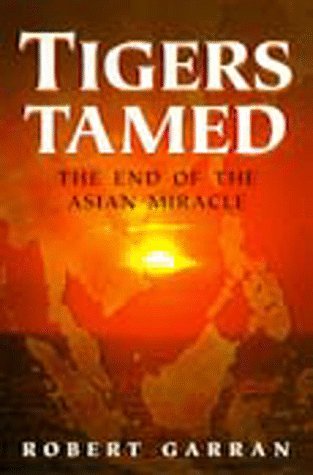 Synopsis: Can the economy of a region go from miracle to meltdown in a few short months? As he traces the dramatic events of late 1997 into 1998, Robert Garran uses firsthand knowledge of Asia and its economics to demonstrate that the miracle was in many ways a myth.

From the Author: When financial crisis engulfed East Asia in the second half of 1997, I had been reporting on Japan and Korea for my Australian newspaper for two years. The biggest riddle for me in Japan was trying to understand its past economic success and that of the countries which it inspired, the Asian tigers. I was sceptical of the explanations of the 'revisionist' school, which had dominated American thinking on the subject for the past decade. The revisonists put too much weight I thought on state intervention and had failed to recognise the weaknesses in the Asian economic model. The Asian economic crisis gave me the chance to flesh out these ideas and see how they applied to Japan and the rest of the region.

My conclusion is that there was right and wrong in the view that East Asia had discovered a unique and exceptional road to economic prosperity: right in that a unique combination of factors in East Asia enabled an extraordinary economic performance; wrong in the belief that these provided a model that could overrule the normal rules of economics.

East Asia's success was not a miracle. Party by design, party by accident, and partly as a matter of history it did many things right, and sometimes even managed to beat the market. But the conditions which seemed to allow Asian countries to beat the market have changed fundamentally with the growing interdependence of economies and financial markets, and will no longer deliver the same positive results.

1. Tigers Tamed: The End of the Asian Miracle (Latitude 20 Books)

2. Tigers Tamed : The End of the Asian Miracle

Book Description University of Hawaii Press. Paperback. Condition: As New. An apparently unread copy in perfect condition. Dust cover is intact; pages are clean and are not marred by notes or folds of any kind. At ThriftBooks, our motto is: Read More, Spend Less. Seller Inventory # G0824821602I2N00

4. Tigers Tamed: The End of the Asian Miracle (Latitude 20 Books)

5. Tigers Tamed: The End of the Asian Miracle (Latitude 20 Books)