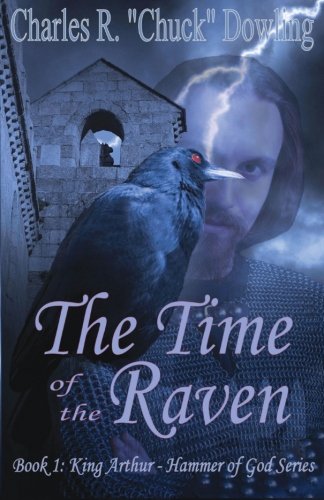 The Time of the Raven: King Arthur - Hammer of God Series - Book 1 (Volume 1)

Synopsis: On a windswept moor near the ancient shrine at Stonehenge, a conference to discuss differences takes place at a meeting where no weapons are allowed. Three hundred British leaders are massacred by Saxon warriors who came to the council with knives hidden in their boots. The occurrence passes into infamy as “The Night of the Long Knives” and ushers onto the scene twenty-five years of continual strife and bloodshed and the beginning of a century long war between Briton and Saxon. Into this bubbling cauldron of treachery and hate comes Arthur, the future King. Merlin, the Raven, is tasked with the mission of raising a boy into a warrior and king that can unite the people and conquer the enemy. Even he is surprised at the depth of the challenges that face them and the ability of his charge to meet them. But can any man, even a budding legend, overcome the treachery of those that seek to kill them all?

About the Author: Mr. Dowling grew up in suburban New York and attended local schools. While in college he worked as a policeman. Upon graduation, he spent ten years as a Marine officer, serving with both the infantry and the artillery. In the business world, Mr. Dowling has been a sales manager, marketing executive and a management consultant. He presently conducts creative writing workshops, does free-lance reporting and he writes novels. He also speaks to writing groups and veteran's organizations. History, particularly military history is his hobby. He belongs to the Marine Corps League and the Marine Corps Association. Extensive experience in the field lends realism to his characters and scenes. Mr. Dowling is also a member and a past director of The Florida Writers Association and is a frequent contribu-tor to their quarterly publication, The Florida Palm. Other organizations include Space Coast Writers Guild, The Maitland Art center and Authors for Charity. He and his wife Arlene have lived in the Orlando area since 1985. He is married and is the father of two sons and a daughter. He also has four grandchildren.

Book Description Double Edge Press, 2012. Paperback. Condition: Good. Connecting readers with great books since 1972. Used books may not include companion materials, some shelf wear, may contain highlighting/notes, may not include cdrom or access codes. Customer service is our top priority!. Seller Inventory # S_246120131

Book Description Condition: Used: Very Good. BC120 This item is in VERY GOOD condition, all pages are intact. Ships same day or next business day. Please allow 2 to 7 days shipping from USA. Book may have signs of shelf wear and dusty. Brouhaha, Inc. is committed to provide each customer with the highest standard of customer service. Seller Inventory # 895-RK3-B5Z

Book Description Double Edge Press, 2012. Condition: Good. A+ Customer service! Satisfaction Guaranteed! Book is in Used-Good condition. Pages and cover are clean and intact. Used items may not include supplementary materials such as CDs or access codes. May show signs of minor shelf wear and contain limited notes and highlighting. Seller Inventory # 1938002105-2-4