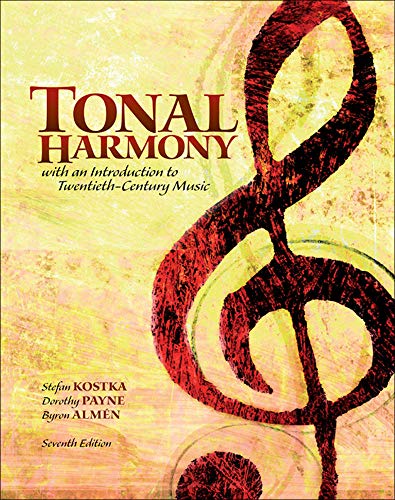 Hardcover. For over two decades Tonal Harmony has been the leading text for the two-year theory curriculum for music majors. Used at nearly 800 schools, Tonal Harmony has been consistently praised f.Shipping may be from multiple locations in the US or from the UK, depending on stock availability. 688 pages. 1.300. Bookseller Inventory # 9780078025143

Synopsis: For over two decades Tonal Harmony has been the leading text for the two-year theory curriculum for music majors. Used at nearly 800 schools, Tonal Harmony has been consistently praised for its practicality and ease of use for student and instructor alike. The straightforward approach is supported by well-chosen examples and thoughtful exercises, and the total presentation is compatible with differing teaching styles and theoretical points of view. In addition, students can purchase a CD of recorded examples for use with the textbook, while audio examples for the workbook are available for download as MP3 files. For instructors, an extensive Instructor's Manual is available and rounds out this comprehensive teaching package.

About the Author: STEFAN KOSTKA

Holds a bachelor’s degree in music and physics from St. Olaf College, a master’s degree in piano performance from Indiana University, and a Ph.D. in music theory from Indiana University. He has been a member of the faculty of the University of Texas at Austin since 1998. He is the author of A Theory of Musical Narrative and the coauthor, with Edward Pearsall, of Approaches to Meaning in Music, both published by Indiana University Press, along with numerous articles and book chapters. He is the winner of several teaching awards, including the prestigious University of Texas System Regents' Outstanding Teaching Award. In addition to his continued performing activities as a pianist and organist, he is active in professional organizations in music, semiotics, and psychology. Dr. Almén teaches courses in the undergraduate harmony sequence, as well as courses in music theory pedagogy, the history of music theory, and score reading.

Book Description Condition: Good. The item shows wear from consistent use, but it remains in good condition and works perfectly. All pages and cover are intact (including the dust cover, if applicable). Spine may show signs of wear. Pages may include limited notes and highlighting. May NOT include discs, access code or other supplemental materials. Seller Inventory # 4WILKM003OWD

Book Description Condition: Good. Used, some wear and tear. May have inscription/personalization. Stock photo may be different from actual cover. Seller Inventory # 4EKGY30065SX

Book Description Condition: Good. All orders ship by next business day! This is a used hardcover book and shows signs of use. This hardcover book may have markings on pages. Dust jacket(if applicable) may be missing. The cover/boards may have moderate wear. The pages may have moderate wear. The spine is in good condition. For USED books, we cannot guaranteed supplemental materials such as CDs, DVDs, access codes and other materials. We are a small company and very thankful for your business!. Seller Inventory # 4CNO3J0003KO

Book Description McGraw-Hill Education, 2012. Condition: Good. A+ Customer service! Satisfaction Guaranteed! Book is in Used-Good condition. Pages and cover are clean and intact. Used items may not include supplementary materials such as CDs or access codes. May show signs of minor shelf wear and contain limited notes and highlighting. Seller Inventory # 0078025141-2-4

Book Description McGraw-Hill Education, 2012. Hardcover. Condition: GOOD. Has little wear to the cover and pages. Contains some markings such as highlighting and writing. Supplemental materials are not guaranteed with any used book purchases. Seller Inventory # 0078025141_abe_gd

Book Description McGraw-Hill Education, 2012. Hardcover. Condition: VERY GOOD. Pages are intact and are not marred by notes or highlighting, but may contain a neat previous owner name. The spine remains undamaged. Supplemental materials are not guaranteed with any used book purchases. Seller Inventory # 0078025141_abe_vg