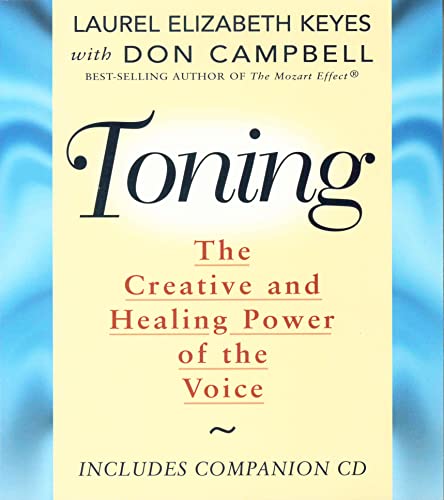 New Edition Includes a Bonus CD containing original recordings of Laurel Keyes, plus Don Campbell's comments and demonstration.
Fact: Sound vibrations move and alter matter.
The purpose of sound has forever been used primarily for communication or entertainment, but the true benefits of sound are also known to be an ancient method of healing. The benefits are felt when people speak, sing, hum, chant, as Laurel Elizabeth Keyes explained in her groundbreaking book Toning over 30 years ago. The specific act of toning creates vocal sounds and vibrational patterns that influence health and well-being. Toning, the Healing and Creative Power of the Voice contains the results and observations that Laurel Keyes experienced while experimenting in her own body as well as in others.
One person who applied the life-changing healing technique is Don Campbell, best-selling author of The Mozart Effect, who credits much of his success to the tools he acquired from Toning.

Laurel Elizabeth Keyes was a teacher and author in Denver, Colorado. She lectured nationally and taught metaphysical and psychological classes for over thirty years and served as Director of the Restorium, a retreat house in the Colorado mountains. She was the author of many spiritual books and discovered the technique of Toning.
Don Campbell is a recognized authority on the transformative power of music, listening and The Mozart Effect. He is the author of nine books, including 1997s best-seller, The Mozart Effect. In addition, he has produced 16 albums including the accompanying Music for The Mozart Effect series for adults and children, which dominated the Billboard Classical charts in 1998 and 1999. Campbell also is a leading lecturer and consultant to organizations ranging from corporations to parenting groups to symphony orchestras.