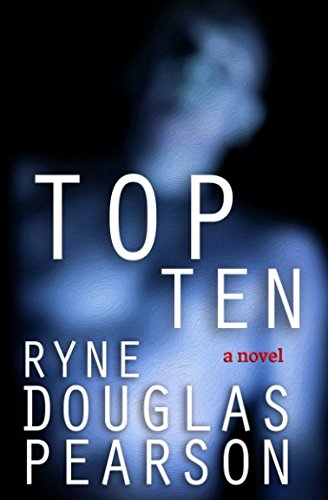 His plan...kill his way to the top. Her orders...stop him. At all costs. A killer who believes himself an artist of unmatched talent is incensed when he is placed last on the FBI's most wanted list, and begins killing off those fugitives above him, each in a twisted manner that serves his creative vision.
But his horrific climb to the top, which leaves both guilty and innocent dead in its wake, must be stopped by FBI Special Agent Ariel Grace, who is given an almost impossible and equally inexplicable task -- save number five on the list.

Or die trying. From its shocking opening to its pulse-pounding conclusion, Top Ten grabs the reader and never lets go.
"An interesting twist on the serial-killer thriller"  Publishers Weekly praise for 'Top Ten'

Ryne Douglas Pearson is an accomplished novelist and screenwriter. He is the author of several novels, including Cloudburst, October's Ghost, Capitol Punishment, Simple Simon, Top Ten, The Donzerly Light, All For One, and Confessions. He is also the author of the short story collection, Dark and Darker. His novel Simple Simon was made into the film Mercury Rising. As a screenwriter he has worked on numerous movies. The film Knowing, based on his original script, was released in 2009 and opened #1 at the box office. Receiving Four Stars from Roger Ebert, who branded it 'among the best science-fiction films I've seen', it went on to earn more than $180 million worldwide. He has also done uncredited work on films such as the remakes of The Day The Earth Stood Still and The Eye.

Despite the often 'dark' nature of his novels and films, Pearson has been noted to have a 'sweet, disarming quality' by Entertainment Weekly-an accusation he has been unable to shake. When not writing he is usually thinking about writing, or touting the wonders of bacon in online conversations. He is addicted to diet soda and the sound of his children laughing. A west coast native, he lives in California with his wife, children, a Doberman Shepherd and a Beagle Vizsla.