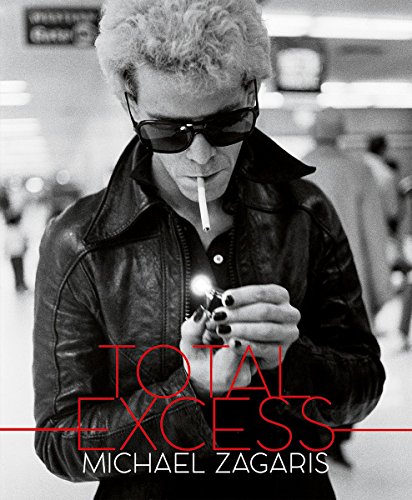 Synopsis: It has been said of Michael Zagaris’ photographic oeuvre that it is the “last untouched rock archive.” Zagaris was responsible for shooting everyone in the rock music scene in San Francisco in the 1970s and ’80s, including The Clash, Grateful Dead, Blondie, Sex Pistols, Bob Dylan, Eric Clapton, Lou Reed and the Velvet Underground, Patti Smith, Led Zeppelin, and many more.
Zagaris’ photographs are some of the best portraits of their kind. Because a lot of his work was taken for pleasure rather than pay, the vast majority of his archive has remained unseen until now. Total Excess is the complete anthology of his incredible rock photography. This is the first book in a series of collaborations between Reel Art Press and Zagaris.
Michael Zagaris (born 1945) grew up in the Central Valley of California. In 1967 he entered law school and also started working for Robert Kennedy as a speechwriter. The trauma of witnessing Kennedy’s assassination at close quarters propelled Zagaris away from politics and law and into photography, and he began covering rock music in San Francisco. He also captured some of the most vital counterculture figures of that period, including Billy Bowers, Divine, Peter Berlin, The Cockettes and Jim Carroll, who used one of Zagaris’ portraits for the cover of his book Basketball Diaries. In 1973 he began as a team photographer for the San Francisco 49ers, and the Oakland As in 1981, both of which he continues to shoot to this day. Zagaris lives in San Francisco.

Review: Many photographers can capture a live performance. It takes guts and good timing to capture the shambles of a backstage trailer that Keith Moon had just trashed. And it takes patience to stick with Lou Reed all the way from Winterland Ballroom to the airport, to photograph him as he drops a coin into a news rack, enticed by the Chronicle headline “Hijackers Kill Hostages. (Sam Whiting San Francisco Chronicle)

Zagaris enjoyed a Zelig-like presence on the 1970s rock scene, photographing everyone from the Grateful Dead to the Clash, Led Zeppelin to Blondie―often offstage with their guards down. (Jack Crager American Photo)

Michael Zagaris has had an interesting trip, to say the least. (Kenneth Bachor Time)

‘Total Excess’ refers to the total access [Michael Zagaris] was given to these artists -- and the total excess he encountered along the way. (Erik Alexander CNN.com)

Michael Zagaris didn't just snap the biggest names in '60s and '70s music, he lived the times as well. (BBC)

Michael Zagaris is a polymath within a single discipline (The Week)

From Jim Morrison vomiting over his shoulder to Keith Moon handing him magic mushrooms, Michael Zagaris is not short on dinner-party anecdotes. His work as a photojournalist documents a wild time in music history, one that makes today’s antics seem rather tame in comparison. (Charlotte DeFazio The Guardian)

To converse with photographer Michael Zagaris is to feel like a bubble inside a just poured Coca-Cola; your head jumps from story to story, happiness swirling around you. (Bronwen Latimer The Washington Post)

His photographs, one of the last, great unseen rock archives, are showcased in a new book, Total Excess, revealing some of the most candid moments of music’s greatest icons. (Vanity Fair)

These are images of youthful exploration that attempt to take the viewer into the musical ensemble itself. (Jacob Brookman British Journal of Photography)

Book Description Reel Art Press, 2016. Condition: Good. A+ Customer service! Satisfaction Guaranteed! Book is in Used-Good condition. Pages and cover are clean and intact. Used items may not include supplementary materials such as CDs or access codes. May show signs of minor shelf wear and contain limited notes and highlighting. Seller Inventory # 1909526401-2-4