Home Alldridge, Thomas Joshua A transformed colony, Sierra Leone, as it was, and as it is;: ... 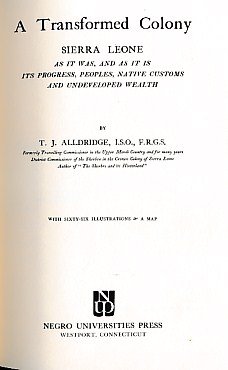 A transformed colony, Sierra Leone, as it was, and as it is;: Its progress, peoples, native customs and undeveloped wealth

Synopsis: This book is, in the main, a record of my personal experiences, for a very large part of my life has been spent in the Colony of Sierra Leone. As Travelling Commissioner, I had to do pioneer work in opening up and in mapping out the far distant and then unknown parts of the Hinterland; and on behalf of the Government I made many treaties with the paramount chiefs. For some years I was the only white man known in the Upper Mendi country, and am still, I believe, the only European official who has travelled round the entire area of what is now the Protectorate. Quite recently I have visited much of the groimd I went over in earlier times, to find, in many cases, improvements that would have been inconceivable to me had I not witnessed them. I am glad to be able to add to my own observations some accounts of the ethnological and official work of others, long since gone before, who, in those darker days, did so much to collect authentic information concerning the numerous tribes of the remoter regions through which they travelled. From their work and my own, often carried through with extreme difficulty, it became very apparent that in the interests of the people, and for the development of the countrys bountiful indigenous wealth, the Government must take definite steps towards pacifying the various tribes and establishing a new state of things in which, under British Protection, the people would be able to enjoy life and be free from that shocking terrorism which was the perpetual condition of their existence until the creation of the Protectorate in 1896. Few Europeans conversant with the Colony as it was when I first landed there, are now living, and that small number is rapidly diminishing.
(Typographical errors above are due to OCR software and don't occur in the book.)

Forgotten Books is a publisher of historical writings, such as: Philosophy, Classics, Science, Religion, Histo

1. Transformed Colony Sierra Leone, as it Was, and as it is: Progress, Peoples, Native Customs and Undeveloped Wealth

2. Transformed Colony Sierra Leone, as it Was, and as it is: Progress, Peoples, Native Customs and Undeveloped Wealth