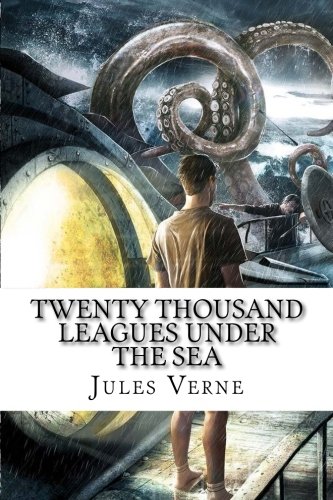 Twenty Thousand Leagues under the Sea

Synopsis: Twenty Thousand Leagues Under the Sea is a classic science fiction novel by French writer Jules Verne published in 1870. The novel was originally serialized from March 1869 through June 1870 in Pierre-Jules Hetzel's periodical, the Magasin d'Éducation et de Récréation. The deluxe illustrated edition, published by Hetzel in November 1871, included 111 illustrations by Alphonse de Neuville and Édouard Riou. The book was highly acclaimed when released and still is now; it is regarded as one of the premiere adventure novels and one of Verne's greatest works, along with Around the World in Eighty Days and Journey to the Center of the Earth. The description of Nemo's ship, called the Nautilus, was considered ahead of its time, as it accurately describes features on submarines, which at the time were very primitive vessels.

About the Author: Jules Gabriel Verne (8 February 1828 – 24 March 1905) was a French novelist, poet, and playwright best known for his adventure novels and his profound influence on the literary genre of science fiction. Verne was born to bourgeois parents in the seaport of Nantes, where he was trained to follow in his father's footsteps as a lawyer, but quit the profession early in life to write for magazines and the stage. His collaboration with the publisher Pierre-Jules Hetzel led to the creation of the Voyages extraordinaires, a widely popular series of scrupulously researched adventure novels including Journey to the Center of the Earth (1864), Twenty Thousand Leagues Under the Sea (1870), and Around the World in Eighty Days (1873).

1. Twenty Thousand Leagues under the Sea

Book Description Paperback. Condition: Very Good. The book has been read, but is in excellent condition. Pages are intact and not marred by notes or highlighting. The spine remains undamaged. Seller Inventory # GOR009408431

2. Twenty Thousand Leagues under the Sea

Book Description CreateSpace Independent Publishing Platform, 2017. Condition: Good. Ships from Reno, NV. Former Library book. Shows some signs of wear, and may have some markings on the inside. Seller Inventory # GRP112307410

3. Twenty Thousand Leagues under the Sea

Book Description CreateSpace Independent Publishing Platform. Paperback. Condition: Good. A copy that has been read, but remains in clean condition. All pages are intact, and the cover is intact. The spine may show signs of wear. Pages can include limited notes and highlighting, and the copy can include previous owner inscriptions. At ThriftBooks, our motto is: Read More, Spend Less. Seller Inventory # G1545211973I3N00

4. Twenty Thousand Leagues under the Sea

Book Description CreateSpace Independent Publishing Platform, 2017. Condition: Good. Shows some signs of wear, and may have some markings on the inside. Seller Inventory # GRP115484449

6. Twenty Thousand Leagues under the Sea