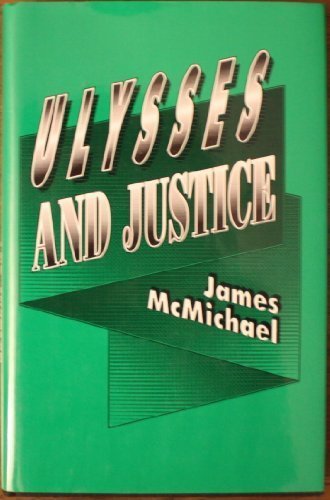 For James McMichael, Joyce's Ulysses invites the wide range of interpretations it has received: what it also does is to prod its interpreters to put the book to some just use. If Ulysses were more conventional than it is, McMichael claims, its readers could set more comfortable limits for themselves in their responses to it, limits that did not extend beyond Ulysses into their dealings with persons in the world. But what happens instead is that the singularly unconventional narrative structure of Ulysses keeps reminding them that the story they are being told about any of the characters is the same kind of story they tell themselves whenever they think about a person. It reminds them that every person needs to be responded to justly and that the justice of their response to any person depends on how justly they characterize that person in their thoughts. McMichael insists that it is justice that Joyce himself most wants. Distinguishing Joyce not only from the immature Stephen Dedalus but also from Ulysses' perfectly unresponsive narrator, this study describes Joyce's tacit but discomforting plea that Ulysses be judged not so much for its literary mastery as for the degree to which it is a just response to persons in need.

About the Author: James McMichael is the author of five books of poetry, including "The World at Large: New and Selected Poems, 1971-1996. "Among his awards are a Guggenheim Fellowship, a Whiting Writers' Award, and the Shelley Memorial Prize.

Book Description Princeton University Press, 1991. Hardcover. Condition: Good. Good condition is defined as: a copy that has been read but remains in clean condition. All of the pages are intact and the cover is intact and the spine may show signs of wear. The book may have minor markings which are not specifically mentioned. Most items will be dispatched the same or the next working day. Seller Inventory # mon0011393661