Home Vollman, William T. UNCENTERING THE EARTH: Copernicus and the Revolutions of the ... 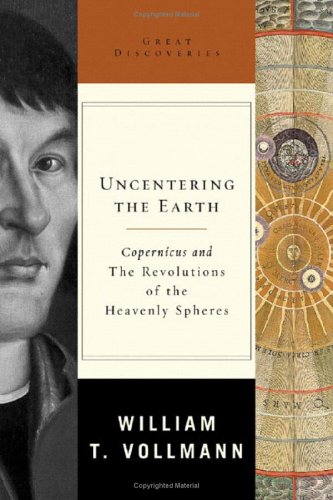 UNCENTERING THE EARTH: Copernicus and the Revolutions of the Heavenly Spheres

Synopsis: The man and the idea that created modern science, as seen by one of today's most celebrated writers.

In 1543, the Polish astronomer Nicolaus Copernicus lay on his deathbed, his just-published masterpiece On the Revolutions of the Heavenly Spheres in his hands. At that time, religious doctrine and common sense dictated that the earth ruled the universe, with the sun, moon, planets, and stars all rotating around it. By putting the sun at the center of that cosmology, his book fomented another kind of revolution—a scientific one—that would lead to a completely new view of the universe, and humanity's place in it.

As contemporary cosmologists explore the universe's vastness and the nearly insignificant role we play in it, the repercussions from Copernicus's radical step continue to resound. With the energetic prose and powerful intelligence for which he is known, William T. Vollmann provides an enlightening and readable explication not only of Copernicus's book but also of Copernicus's epoch, and the momentous clash between the two. 20 diagrams.

About the Author: William T. Vollmann is the author of several works of fiction, including The Atlas and The Rainbow Stories, and has contributed stories and journalism to many publications. He lives in California.

1. Uncentering the Earth Copernicus and The Revolutions of the Heavenly Spheres