Items related to An Uncommon Bond 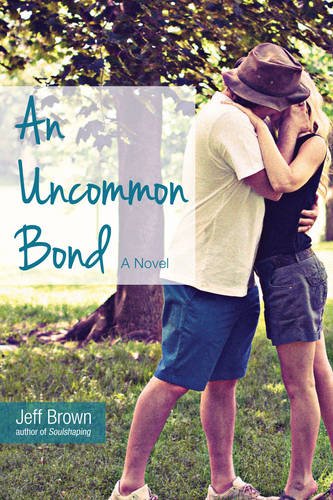 In this higher consciousness love story, author Jeff Brown shares the poignant journey of Lowen and Sarah, two soulmates who have found their way to one another yet again. This intimate and revealing account is told through Lowen's eyes, as he experiences the heights and depths that come with meeting his beloved. In this remarkably engaging story, we walk beside the lovers as they touch the divine and then struggle to ground their love in daily life. From the heights of sacred sexuality to the depths of human foible, they ultimately have to choose: surrender to this love or shrink back to mediocrity, work through their emotional baggage or flee the connection, open to the next portal of possibility or postpone it until the next lifetime. Shaped and reshaped in loves cosmic kiln, Sarah and Lowen become a symbol of our own longing for wholeness in the presence of another.

This book is a rare and unique gem, one of the first of its kind. Rivetingly real and magically poetic, it sheds new light on the evolving relational paradigm of "uncommon bonds," "soulmates" and Jeff Brown's unique term "wholemates." In a world that yearns for deep soul connection, An Uncommon Bond provides a blueprint of conscious relationship for us all-reminding us of the luminous nature of great love, and showing us the opportunities for expansion that live at its heart.
ENDORSEMENTS

"Jeff Brown has done it again... Within your hands is another magical masterpiece. If you are ready for a whirlwind of radical honesty, bare-bone intimacy and the raw dissecting that MUST go into Sacred Relationship then read on. A jewel of the highest order." ~ANAIYA SOPHIA, Author of Sacred Sexual Union & co-author of Womb Wisdom

"In An Uncommon Bond, we are shown love as a relentless force within the universe, acting on the lives of the two main characters to crack open their hearts that their souls might come home to each other and we recognize their story as our own. Written with passion, honesty and wisdom, this is an uncommon book." ~PHILIP SHEPHERD, Author of New Self, New World: Recovering Our Senses in the Twenty-first Century

"An Uncommon Bond is both evocative and riveting, wrapping its way around the heart and soul of anyone who s ever been involved or interested in a deeper type of love that extends beyond the realm of common sense and connection. Jeff Brown brilliantly explores the rapture, the darkness, the confusion, and the elevation that pulses inside the painfully exquisite merging of two people who were unprepared for such a transformational and transcendent relational experience. Stunningly eye opening, shape shifting and profound, I will never again look at the beautiful possibilities of love the same as before." ~VICTORIA ERICKSON, Author of Edge of Wonder

"Jeff Brown elegantly weaves an evolutionary romance in An Uncommon Bond. Whereas most love stories end with "happily ever after," Jeff takes us beyond the fairy tale and into the grounded spirituality necessary to truly meet the Beloved, both within ourselves and in our relationships. He is a master wordsmith, engaging and enlightening us with his whimsical wordplay as we watch the journey unfold between Lowen and Sarah, the story's "Scar-Crossed Lovers." Armed with his witty-wise lexicon and his deep understanding of human nature, Jeff presents a new paradigm of relating that is essential to the healing and growth of our society." ~CANDICE HOLDORF, Actress and Author of From 6 to 9 and Beyond: Widening the Lens of Feminine Eroticism

A former criminal lawyer and psychotherapist, Jeff Brown is the author of Soulshaping: A Journey of Self-Creation, and Ascending with Both Feet on the Ground. Endorsed by authors Elizabeth Lesser, Oriah Mountain Dreamer and Katherine Woodward Thomas, "Ascending" is a collection of Jeff's most popular spiritual graffiti -- quotes, soul-bytes and aphorisms frequently shared in social media. He is also the author of the viral blog Apologies to the Divine Feminine (from a warrior in transition) and the producer and key journeyer in the award winning spiritual documentary, Karmageddon, which also stars Ram Dass, Seane Corn, David Life, Deva Premal and Miten. Interviewed by CNN and FoxNews.com, he has written a series of inspirations for ABC's Good Morning America and appeared on over 200 radio shows. His second quotes book, Love it Forward, was published on Valentine's day, 2014. He is also the owner of Enrealment Press and the creator of a new online school, Soulshaping Institute, which launched in February, 2015. His new book, a higher consciousness love story called An Uncommon Bond, was published to rave reviews on May 1, 2015. His next book- Spiritual Graffiti- will be released on November 15, 2015. It is his third in the series of quotes books.