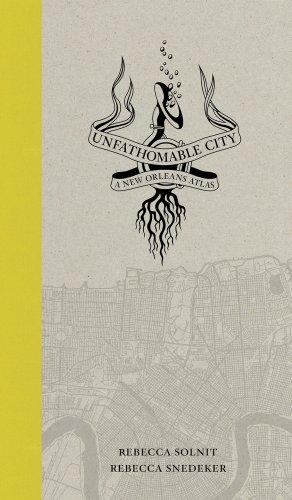 Synopsis: Like the bestselling Infinite City: A San Francisco Atlas, this book is a brilliant reinvention of the traditional atlas, one that provides a vivid, complex look at the multi-faceted nature of New Orleans, a city replete with contradictions. More than twenty essays assemble a chorus of vibrant voices, including geographers, scholars of sugar and bananas, the city's remarkable musicians, prison activists, environmentalists, Arab and Native voices, and local experts, as well as the coauthors’ compelling contributions. Featuring 22 full-color two-page-spread maps, Unfathomable City plumbs the depths of this major tourist destination, pivotal scene of American history and culture and, most recently, site of monumental disasters such as Hurricane Katrina and the BP oil spill.
The innovative maps’ precision and specificity shift our notions of the Mississippi, the Caribbean, Mardi Gras, jazz, soils and trees, generational roots, and many other subjects, and expand our ideas of how any city is imagined and experienced. Together with the inspired texts, they show New Orleans as both an imperiled city―by erosion, crime, corruption, and sea level rise―and an ageless city that lives in music as a form of cultural resistance. Compact, lively, and completely original, Unfathomable City takes readers on a tour that will forever change the way they think about place.

From the Inside Flap: "This series of atlases is one of my absolute favorites. Vivid, beautiful, and deceptively meaningful, Unfathomable City successfully pushes cartographic conventions. It explores what it means to know a place, not just the street grid. A delight to behold, this is an incredible achievement rarely seen in modern cartography." ―William McNulty, cartographer, former director of maps at National Geographic, former graphics editor, New York Times

"This bright, rolling river of a book carries a chorus of mapmakers, writers, and artists singing of deep memory in New Orleans. Unfathomable City is a book to cherish―and sure to be a classic." ―Jason Berry, New Orleans–based journalist and coauthor of Up from the Cradle of Jazz: New Orleans Music since World War II

"Race, space, and place: this atlas is a people’s ecology of persistent resistance, an open-ended historical geography guiding toward an indomitable future―a permanent revolution no less likely than the city itself. Read this book!" ―Ruth Wilson Gilmore, Professor of Earth and Environmental Sciences, CUNY Graduate Center

Book Description University of California Press. Hardcover. Condition: Very Good. A copy that has been read, but remains in excellent condition. Pages are intact and are not marred by notes or highlighting, but may contain a neat previous owner name. The spine remains undamaged. At ThriftBooks, our motto is: Read More, Spend Less. Seller Inventory # G0520274032I4N00

Book Description University of California Press, 2013. Hardcover. Condition: VERY GOOD. Pages are intact and are not marred by notes or highlighting, but may contain a neat previous owner name. The spine remains undamaged. Supplemental materials are not guaranteed with any used book purchases. Seller Inventory # 0520274032_abe_vg

Book Description University of California Press, 2013. Condition: Good. A+ Customer service! Satisfaction Guaranteed! Book is in Used-Good condition. Pages and cover are clean and intact. Used items may not include supplementary materials such as CDs or access codes. May show signs of minor shelf wear and contain limited notes and highlighting. Seller Inventory # 0520274032-2-4

There are 24 more copies of this book