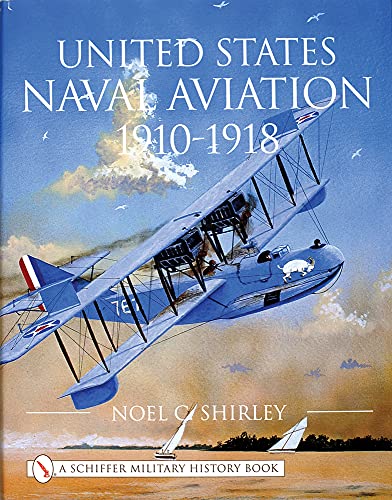 Synopsis: United States Naval Aviation 1910-1918 for the first time provides a comprehensive study of the formation and initial deployment of naval aviation in a world war. The late eminent naval historian R.D. Layman wrote that the subject of naval aviation has, "never been adequately explored, had been often underestimated, ignored, or unrealized." The author of this book, based upon over thirty years of research into the subject of World War I aviation, and based upon both primary and secondary reference sources, has compiled into one source a complete history of the early development of naval aviation in the United States. He then discusses the manner and role that the naval aviation service applied to the war effort during 1917-1918. The book covers not only the subject of naval aircraft, but also describes the activities of the Navy in the field of lighter-than-air craft. Specific information is provided on each of the Naval Air Stations constructed and operated, both domestically as well as in Foreign Service during the War. Detailed discussion is also provided regarding the role of Marine Corps aviation during this time period.

Book Description Schiffer Publishing Ltd (US), 2004. Condition: Good. A+ Customer service! Satisfaction Guaranteed! Book is in Used-Good condition. Pages and cover are clean and intact. Used items may not include supplementary materials such as CDs or access codes. May show signs of minor shelf wear and contain limited notes and highlighting. Seller Inventory # 0764311794-2-4

Book Description Schiffer Publishing, Ltd. 2000-09-30, 2000. Hardcover. Condition: Good. Item is in good condition. Some moderate creases and wear. This item may not come with CDs or additional parts including access codes for textbooks. Might be an ex-library copy and contain writing/highlighting. Seller Inventory # DS-0764311794-3

Shipping: US$ 6.44
From United Kingdom to U.S.A.
Destination, rates & speeds