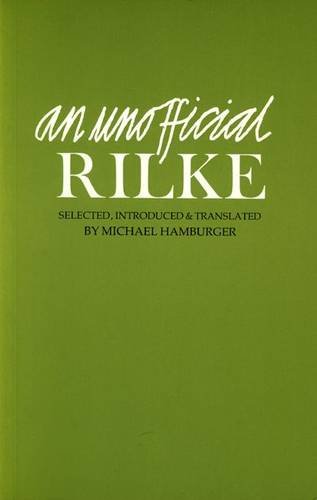 `An Unofficial Rilke' is Michael Hamburger's choice from the many miscellaneous poems which Rilke wrote between 1912, when the `Duino Elegies' began to take shape in his mind, and his death in 1926. From Rilke's crisis and post-crisis years Michael Hamburger has translated poems in which Rilke confronted energies or realities that endangered his mastery, or those in which he ventured into territory that was new to him. Some of these poems will seem uncharacteristic to readers whose view of Rilke is based on his more official canon; Rilke's failure to recognize their worth can only be understood in terms of his loss of faith and his sense of disorientation.

In his penetrating and sympathetic introduction Michael Hamburger describes the nature of Rilke's personal and artistic crisis, explores the tensions and cross-currents of his later poetry, and argues persuasively for the revaluation of his miscellaneous poems. Michael Hamburger, poet and critic, is the leading translator of German poetry.

Book Description Paperback. Condition: Acceptable. May have some shelf-wear due to normal use. Seller Inventory # 0KVBKD00CEMK

Book Description Anvil Press Poetry, 1982. Paperback. Condition: Very Good. Very Good: a copy that has been read, but is in excellent condition. Pages are intact and not marred by notes or highlighting. The spine remains undamaged. Most items will be dispatched the same or the next working day. Seller Inventory # wbb0012842617

Book Description Anvil Press Poetry, 1982. Paperback. Condition: Good. A few small marks to page edges Good condition is defined as: a copy that has been read but remains in clean condition. All of the pages are intact and the cover is intact and the spine may show signs of wear. The book may have minor markings which are not specifically mentioned. Most items will be dispatched the same or the next working day. Seller Inventory # mon0010137953