Items related to The Untold History of Ramen: How Political Crisis in... 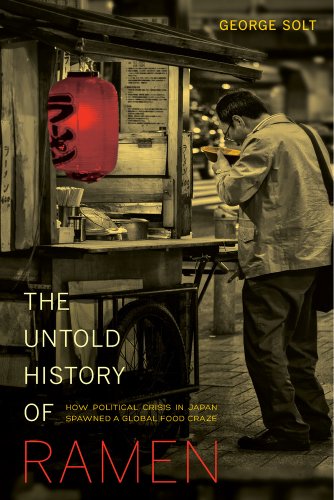 The Untold History of Ramen: How Political Crisis in Japan Spawned a Global Food Craze (California Studies in Food and Culture)

Title: The Untold History of Ramen: How Political ...

A rich, salty, and steaming bowl of noodle soup, ramen has become an international symbol of the cultural prowess of Japanese cuisine. In this highly original account of geopolitics and industrialization in Japan, George Solt traces the meteoric rise of ramen from humble fuel for the working poor to international icon of Japanese culture.

Ramen’s popularity can be attributed to political and economic change on a global scale. Using declassified U.S. government documents and an array of Japanese sources, Solt reveals how the creation of a black market for American wheat imports during the U.S. occupation of Japan (1945–1952), the reindustrialization of Japan’s labor force during the Cold War, and the elevation of working-class foods in redefining national identity during the past two decades of economic stagnation (1990s–2000s), all contributed to the establishment of ramen as a national dish.

This book is essential reading for scholars, students of Japanese history and food studies, and anyone interested in gaining greater perspective on how international policy can influence everyday foods around the world.

"George Solt's The Untold History of Ramen is a wonderful guide to the world of ramen that will please aficionados, inform neophytes, and satisfy students of Japanese food and popular culture." ―Samuel H. Yamashita, Henry E. Sheffield Professor of History, Pomona College

"European and North American diners who previously knew only packaged ramen are now waiting in long lines at specialty restaurants for Japan's iconic noodle soup. Solt's fascinating study reveals the role of U.S. foreign policy in ramen's past and shows how a Japanese worker's meal became a national food and rode to the forefront of the latest wave in Japanese cuisine to arrive in the West." Eric C. Rath, Professor of History, University of Kansas