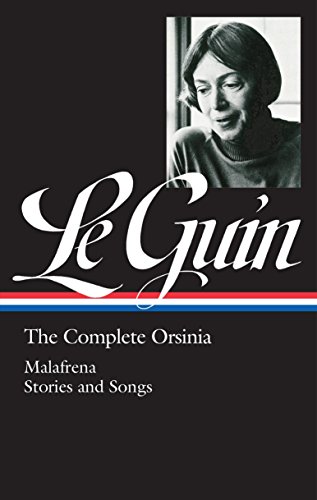 Synopsis: The inaugural volume of Library of America’s Ursula K. Le Guin edition gathers her complete Orsinian writings, enchanting, richly imagined historical fiction collected here for the first time. Written before Le Guin turned to science fiction, the novel Malafrena is a tale of love and duty set in the central european country of Orsinia in the early nineteenth century, when it is ruled by the Austrian empire. The stories originally published in Orsinian Tales (1976) offer brilliantly rendered episodes of personal drama set against a history that spans Orsinia’s emergence as an independent kingdom in the twelfth century to its absorption by the eastern Bloc after World War II. The volume is rounded out by two additional stories that bring the history of Orsinia up to 1989, the poem “Folksong from the Montayna Province,” Le Guin’s first published work, and two never before published songs in the Orisinian language.

About the Author: Ursula K. Le Guin is one of the most celebrated writers of her generation, recipient of multiple Hugo, Nebula, Locus, and World Fantasy Awards. In 2014, she was awarded the National Book Foundation Medal for Distinguished Contribution to American Letters.

Brian Attebery, editor, is professor of English at Idaho State University and the editor of Journal of the Fantastic in the Arts. He edited The Norton Book of Science Fiction (1997) with Ursula K. Le Guin and Karen Joy Fowler and is the author of Stories About Stories: Fantasy and the Remaking of Myth (2014) and Decoding Gender in Science Fiction (2002), among other books.

Book Description Library of America, 2016. Hardcover. Condition: Good. Connecting readers with great books since 1972. Used books may not include companion materials, some shelf wear, may contain highlighting/notes, may not include cdrom or access codes. Customer service is our top priority!. Seller Inventory # S_279259436

Book Description Library of America, 2016. Condition: Good. A+ Customer service! Satisfaction Guaranteed! Book is in Used-Good condition. Pages and cover are clean and intact. Used items may not include supplementary materials such as CDs or access codes. May show signs of minor shelf wear and contain limited notes and highlighting. Seller Inventory # 1598534939-2-4

There are 24 more copies of this book