Items related to THE VALLEY OF AMAZEMENT 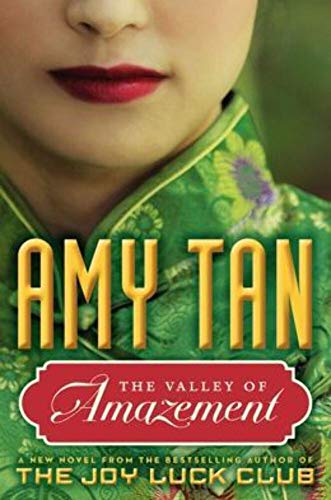 THE VALLEY OF AMAZEMENT

Title: THE VALLEY OF AMAZEMENT

Amy Tan’s The Valley of Amazement is a sweeping, evocative epic of two women’s intertwined fates and their search for identity, that moves from the lavish parlors of Shanghai courtesans to the fog-shrouded mountains of a remote Chinese village.

Spanning more than forty years and two continents, The Valley of Amazement resurrects pivotal episodes in history: from the collapse of China’s last imperial dynasty, to the rise of the Republic, the explosive growth of lucrative foreign trade and anti-foreign sentiment, to the inner workings of courtesan houses and the lives of the foreign “Shanghailanders” living in the International Settlement, both erased by World War II.

A deeply evocative narrative about the profound connections between mothers and daughters, The Valley of Amazement returns readers to the compelling territory of Amy Tan’s The Joy Luck Club. With her characteristic insight and humor, she conjures a story of inherited trauma, desire and deception, and the power and stubbornness of love.

An Amazon Best Book of the Month, November 2013: For a hefty half of her gorgeous new novel, The Valley of Amazement, Amy Tan instructs us in the finer points of life as a courtesan in early 20th century China: expect and revel in sensual descriptions of the clothes, the customs, even the not-so-niceties of catering to rich men in a very regimented society. Lulu Minturn is a white Californian who’d run away with a Chinese painter, established the best courtesan house in Shanghai and given birth to a beautiful “Eurasian” (in the parlance of the time) daughter, Violet. Soon, either because she was tricked or deceitful, Lulu abandons Violet and flees back to America; history soon is in danger of repeating itself when Violet gives birth to her own daughter. (Eventually, the scene shifts to California, where the family searches for redemption and reconciliation.) Nobody does mother-daughter angst and cross cultural conflict better than Tan, who has been literally writing the book(s) on these topics for years. What makes this novel special is its meticulous language--readers may be struck by the juxtaposition of poetry and Anglosaxon equivalents in descriptions of courtesans’ sex lives--and its elucidation of the cultural upheavals at the time. This is as much a historical novel as it is a family story, at once intimate and sweeping, personal and political. You’ll have learned something by the end--and you’ll probably also be weeping. --Sara Nelson