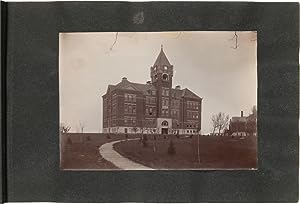 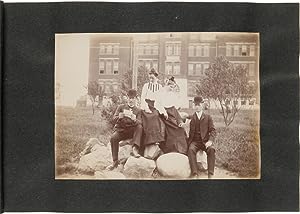 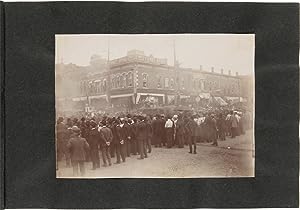 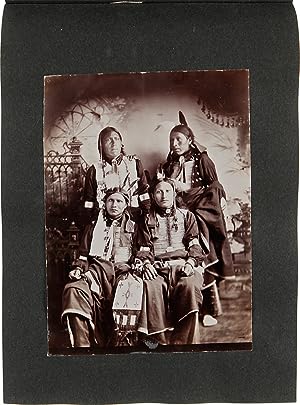 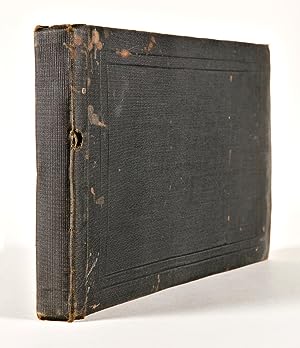 Thirty-seven photographs, most approximately 4 3/4 x 6 1/2 inches, all but four mounted on album pages. Oblong quarto. Limp cloth photo album. Cloth a bit stained and discolored around the edges. A few of the images lightly faded. Very good. An album of early vernacular photographs of Nebraska, opening with an image of the large central building of Union College in Lincoln, founded by the Seventh-Day Adventist Church in 1891. A healthy amount of the images in the album concern groups of young men and women in late-Victorian dress posing for the camera in front of the Union College main building, or in a variety of pastoral settings. The compiler was likely a student or parent of a student who attended Union College. They also visited a nearby farm, likely a family farm, and include several images of the farmhouse, cattle, and rural views. The compiler of the album also spent time in the city of Lincoln, as the album contains two street scenes of Lincoln before the advent of the automobile. The first of two downtown street scenes shows the Burlington Route ticket office next to the Lincoln Transfer Company, and other businesses. The second of the street scenes is a photograph showing a long stretch of O Street, with the Mayer Bros. store in the immediate right foreground. Both scenes depict a large crowd of onlookers filling the streets while watching some type of parade. In addition, there is a nice shot of the Old Nebraska State Capitol Building and the water fountain on the Capitol grounds, with the capitol building in the deep background. The album concludes with a striking photograph of four Native American men in full dress. Sadly, the figures are not identified, but certainly warrant further research. An excellent collection of early Lincoln, Nebraska photography. Seller Inventory # WRCAM56356