Skip to main content
Home McArthur, John, Jr. VIEW OF THE DEPARTMENT FOR WHITE CHILDREN OF THE HOUSE OF REFUGE... 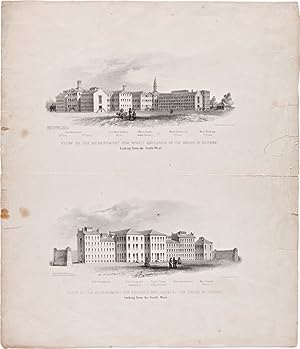 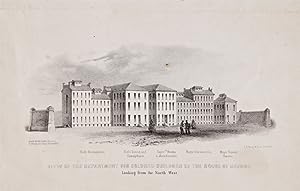 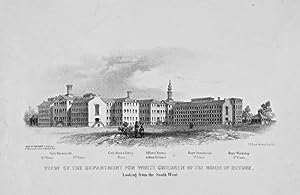 Two lithographic images printed on one sheet, 14 1/4 x 12 1/4 inches. Central horizontal fold. Sheet somewhat edgeworn and creased, several closed tears in edges (repaired on verso with tape). Light staining and foxing, images almost untouched. Very good. An interesting artifact of the workshop of an important Philadelphia lithographer, this sheet brings together two views of famous Philadelphia architect John McArthur Jr.'s design for the new campus of Pennsylvania's first juvenile reformatory. First established in 1828 by leading Philadelphia merchants and philanthropists, the House of Refuge was a place for youth under the age of twenty-one to receive rehabilitation rather than punishment. The print shows the exterior view of department buildings including the girls' and boys' dormitories; girls' work and sitting room; boys' workshop; and the officers' rooms. The buildings, located between Parrish and Brown streets between 22nd and 24th streets, opened in 1850. The buildings pictured here were also the first time the House of Refuge was expanded to accommodate non-white children. Perhaps unsurprisingly, the reformatory didn't quite live up to its founders' aspirations, and an investigation in 1876 found considerable evidence of abuse and shady dealings by the board, who nonetheless faced no repercussions. The reformatory continued operations (as well as its history of abuse) as the Glen Mills School until 2019, when the Pennsylvania Department of Human Services revoked all of its licenses and ordered an emergency evacuation of all students. These designs won McArthur his first prize in a competition, and he afterwards became one of the nation's most prominent architects, perhaps best known for designing Philadelphia City Hall. He also designed numerous temporary buildings during the Civil War, after which he became Superintendent of Federal buildings in his home city. These two views were used as frontispieces for the THIRTIETH ANNUAL REPORT OF THE BOARD OF MANAGERS OF THE HOUSE OF REFUGE (Philadelphia: Printed by Henry B. Ashmead, 1858). This copy likely reveals how they were printed two to a sheet before being separated for binding. We locate copies of these prints only at the Boston Athenaeum, Library Company of Philadelphia, and Library of Congress, all of which are separated and catalogued as individual prints rather than still joined. An attractive pair of prints of an important American' architect's work, in a rare unseparated state. WAINWRIGHT LITHOGRAPH COLLECTION 426, 427. Seller Inventory # WRCAM57175

Title: VIEW OF THE DEPARTMENT FOR WHITE CHILDREN OF...