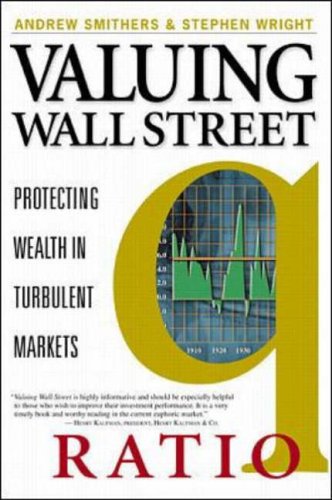 Offers massive evidence that today's stock market is overvalued and is subjecting investors to the highest financial risk in history. Shows that extreme values of q preceded every major market top of the 20th century, and tells how to prepare investment portfolios against catastrophic losses, as well as how to track q to determine when to get back into the stock market. Smithers is founder of a company that provides asset allocation advice to fund management companies, and he is also a newspaper columnist. Wright spent several years with the Bank of England and now teaches and conducts research at Cambridge University. Annotation c. Book News, Inc., Portland, OR (booknews.com)

"Most books about the stock market tell you how to make money. This one ... will show you how to avoid losing it," begins this smart, blunt, cautionary tale based on Nobel laureate James Tobin's 1969 "q ratio," which posits, among other things, that no matter how bullish a market gets, it's bound to snap back into place at some point--and those who don't brace for the reversal will feel its sting. The authors, one a prominent asset-allocation adviser and the other a former head of macroeconomic forecasting for the Bank of England, warn that it's only a matter of time before the overexuberant market of the early 21st-century topples like its counterparts in 1929 and 1968. Here they set out to show why and how this will happen--as well as to tell stockholders what they should and should not do if they want to emerge intact.

After making a cogent new argument in defense of the still-controversial q ratio, the authors show how it plays into principles of stock-market risk and return, how it has determined the value of Wall Street in the past and will continue to do so, and how to apply it as a practical investing tool. They do a neat job of parsing the good and bad news about stocks as a sound investment for the future, and of what to do and not do with one's money come the inevitable bear market. From there, they get down to the nitty-gritty of valuing the stock market, providing four key tests for any indicator of value and explaining how to fold in such factors as the dividend yield, the price-earnings ratio, the adjusted price-earnings multiple, yield ratios, and yield differences. They wrap up with a look at what they call "the q debate" among both economists and stockbrokers, and finally, they apply the q ratio specifically to the U.S. economy, rebuking Alan Greenspan's Federal Reserve for its role in what they see as the coming U.S. bubble burst.

With its plain English, helpful illustrated charts, vivid examples from history, and even the occasional employment of the likes of Alice in Wonderland to prove its points, Valuing Wall Street should be accessible to those with a working understanding of the market and economic principles. All told, this book is not so much a how-to as it is a theoretical forecast whose tidings investors might want heed as we near what Smithers and Wright warn are rough years ahead. --Timothy Murphy