Items related to A Verse Map of Vancouver 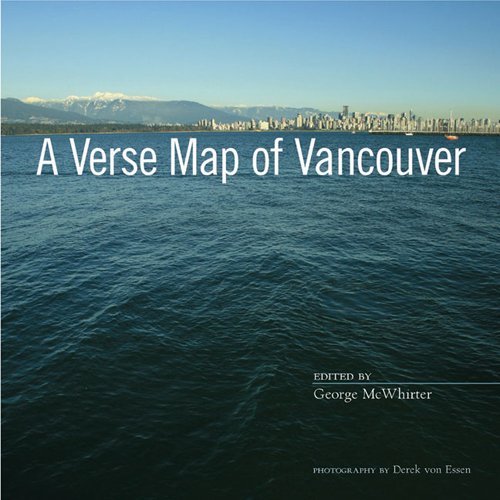 A Verse Map of Vancouver

Quantity available: 1
View all  copies of this book
Buy Used
Price: US$ 45.00 Convert Currency
Shipping: US$ 5.00 From Canada to U.S.A. Destination, rates & speeds
Add to basket

Title: A Verse Map of Vancouver

In Vancouver the avenues are numbered and the streets named. That's a feature of Vancouver. Vancouver's Poet Laureate, George McWhirter, has taken on the task of creating an anthology on those features that give the face of Vancouver its identity. East Hastings could fill an anthology, but most of the city goes unversed.

A Verse Map of Vancouver fills the gap in Vancouver's verse geography by mapping the city, its neighbourhoods, its corners and intersections, its parks and landmarks. A Verse Map is a word ordinance survey by poets of the locality, from those whose names have a legendary place (Pat Lowther, George Woodcock) through a roster of verse surveyors—too great a list to include them all here—who have established themselves over the last three to four decades (John Pass, Evelyn Lau, John Donlan, Daphne Marlatt, Roy Miki, George Stanley, Linda Rogers, Tom Wayman, Meredith Quartermain, Kate Braid, Brian Brett, Bud Osborn) on through to the current generation who are etching their marks on the city (Catherine Owen, Rita Wong, Chris Hutchinson, Mark Cochrane, Russell Thornton, Kuldip Gill, Fiona Lam). Upwards of 100 poets have been gathered here accompanied by the rich city photography of Vancouver artist and designer Derek von Essen.

George McWhirter is a professor in the Creative Writing Program at the University of British Columbia. He is the author of over a dozen books of poetry and fiction. His translation of selected poems by Jose Emilio Pacheco won him the F.R. Scott Prize for translation. Mr. McWhirter's collection, Catalan Poems, shared the Commonwealth Poetry Prize, and his novel, Cage, won the Ethel Wilson Fiction Prize in 1987.


All books are sold guaranteed to your satisfaction. Bookseller since 1995. Unless otherwise noted, please assume all books are sound and clean, with pages unmarked.


Shipping rates are based on books weighing 2.2 pounds (1 kilogram) or less. For larger and heavier books, additional charges may apply.