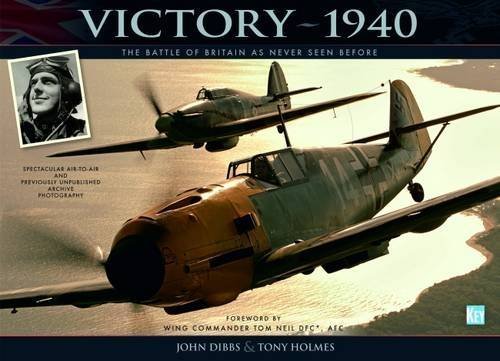 Synopsis: Scramble! Scramble! Almost 80 years ago the skies over Britain were full of dogfighting aircraft as young pilots of the RAF fought to repel the might of the German war machine. Described by Prime Minister Winston Churchill as 'Their Finest Hour.' The Battle of Britain is a defining moment in recent history and remains an inspiration to us all.

Victory 1940 presents a pictorial chronology of the legendary fight, when the might of the Luftwaffe was defeated for the first time by Churchill's 'Few.'

The history of the battle as been recounted many times, but this book offers a new and exclusive approach, through razor-sharp contemporary imagery of restored Battle of Britain warbirds combined with extensive archive material previously unpublished.

The graphic illustrations of Victory 1940 are supported by a riveting account of the greatest air battle of all time, as seen through the eyes of the combatants from both sides. We witness their triumph and tragedies as they battle for a cause and survival itself.

Victory 1940 draws upon John Dibbs' amazing warbird photograpy, and his Battle of Britain restored image archive, which provide fresh insights into the events of 1940 and enhance the compelling text.

In his exclusive foreword to Victory 1940, Battle of Britain Hurricane ace Tom Neil calls for 'the need to implant in the minds of the young, the gallantry and sacrifices of those who fought in the Battle of Britain,' and that for this reason the book should be 'read and enjoyed.'

About the Author: Forging a career as a specialist air-to-air photographer, John has flown over 1,000 aerial sorties and his work graces the covers of the World’s leading aviation journals. He also produces the highly successful Flying Legends book and calendar series and has 15 previous books to his name.

Book Description imusti, 2015. Hardcover. Condition: VERY GOOD. Pages are intact and are not marred by notes or highlighting, but may contain a neat previous owner name. The spine remains undamaged. Seller Inventory # 1910415499_abe_vg

Book Description Crecy (For Specialty Press) 2015-01-01, 2015. Hardcover. Condition: Very Good. Item is in very good condition. If supplemental codes/CDs for textbooks are required please contact us prior to purchasing as they may be missing. Seller Inventory # DS-1910415499-2

6. Victory-1940: The Battle of Britain as Never Seen Before