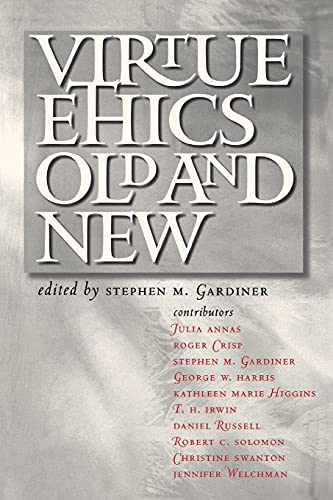 "There are grounds for saying that contemporary work in virtue ethics is, if not quite in its theoretical infancy, at least not far out of diapers. And this suggests that we should be gentle and nurturing, allowing it time to flourish before coming to any definitive verdict on its merits.... However, it is hard to deny that modern-day virtue ethics is part of a long, sophisticated and fairly continuous tradition. Not only does the approach have origins almost as ancient as philosophy itself, but its history also includes extensive work by such philosophical luminaries as (at least) Socrates, Plato, Aristotle, the Stoics, Aquinas, and (perhaps) Hume and Nietzsche. And this suggests that we should already be in a good position to assess its appeal."―from the Introduction

In Virtue Ethics, Old and New, ten philosophers seek to enrich the contemporary understanding and development of virtue ethics through a detailed examination of some key contributions from its past. Their essays demonstrate the continuing relevance of the history of moral philosophy to contemporary debates.

"Virtue Ethics, Old and New makes significant original contributions and offers useful continuations of current topics. It is a solid addition to the literature on virtues and virtue ethics."—Michael Stocker, Syracuse University

"Virtue Ethics, Old and New is a novel and interesting collection that integrates historical and contemporary work. The chapters are clearly written, well structured, and philosophically adept. Given the list of contributors and the quality of the material, I think that the book is essential reading for anyone seriously interested in virtue ethics. In addition, it will prove attractive to readers interested in the particular historical figures and movements covered: Aristotle, the Stoics, Seneca, Aquinas, Hume, and Nietzsche."—Michael Brady, University of Stirling