Items related to Voice of the Leopard: African Secret Societies and... 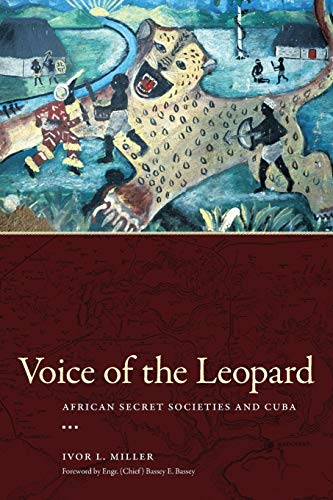 In Voice of the Leopard: African Secret Societies and Cuba, Ivor L. Miller shows how African migrants and their political fraternities played a formative role in the history of Cuba. During the eighteenth and nineteenth centuries, no large kingdoms controlled Nigeria and Cameroon's multilingual Cross River basin. Instead, each settlement had its own lodge of the initiation society called Ékpè, or “leopard,” which was the highest indigenous authority. Ékpè lodges ruled local communities while also managing regional and long-distance trade. Cross River Africans, enslaved and forcibly brought to colonial Cuba, reorganized their Ékpè clubs covertly in Havana and Matanzas into a mutual-aid society called Abakuá, which became foundational to Cuba's urban life and music.

Miller's extensive fieldwork in Cuba and West Africa documents ritual languages and practices that survived the Middle Passage and evolved into a unifying charter for transplanted slaves and their successors. To gain deeper understanding of the material, Miller underwent Ékpè initiation rites in Nigeria after ten years' collaboration with Abakuá initiates in Cuba and the United States. He argues that Cuban music, art, and even politics rely on complexities of these African-inspired codes of conduct and leadership. Voice of the Leopard is an unprecedented tracing of an African title-society to its Caribbean incarnation, which has deeply influenced Cuba's creative energy and popular consciousness.

First step forward since Lydia Cabrera, this amazing book is destined to become a classic in its field. Unreservedly recommended. (Robert Farris Thompson, author of Tango: The Art History of Love and Aesthetic of the Cool: Afro-Atlantic Art and Music)

A remarkable exercise in interdisciplinary and multidisciplinary research, Miller's book is an outstanding study of an institution that Africans re-created in the Americas. It ranks among the best of its genre and is a major contribution to the literature on the African diaspora. (Colin Palmer, Dodge Professor of History at Princeton University and author of Eric Williams and the Making of the Modern Caribbean)