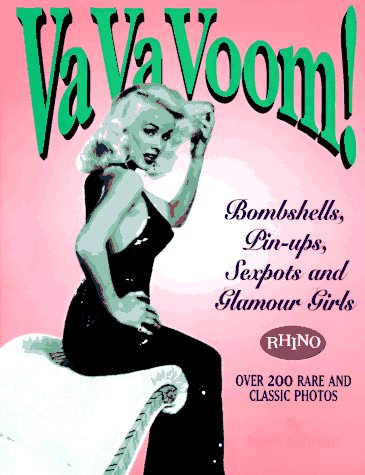 In the '40s and '50s, the bold, breathtaking glamour girls who stepped into the spotlight were a special group, almost magical, and they captured the imagination of men (and the secret admiration of women) like never before. In this book, more than 100 of these women are profiled, including Mamie Van Doren, Betty Brosmer, Jayne Mansfield, and Blaze Starr. Photos, many in color.

Described by the publisher as "the first truly comprehensive account tracing... the careers of the most fetchingly beautiful ...women from the worlds of film and TV, pin-up modeling, and burlesque during the age of glamour girls," this work both documents and contributes to the exploitation of women. Details of the lives and careers of over 100 women are presented, including substantial lists of their movie and magazine appearances. Sullivan, touted as a "recognized expert on the subject of glamour girls," certainly has done considerable research and is a literate writer. He seems to want to have it both ways, however, commenting occasionally on the tawdriness, egotism, and self-exploitation of some of his subjects but relying heavily on titillating and frequently puerile anecdotes and quotations and a narrative couched in a worshipful tone, with repeated emphasis on the subjects' bust size. Ink is spilled debating such issues as the color of Jayne Mansfield's bathing suit during a particular publicity stunt and whether it was one- or two-piece. The publisher claims that "over 200 rare and classic photos" are included, almost all emphasizing the subjects' breasts, including at least two dozen shots in which they are bare. Research libraries that collect documentation of the sexual exploitation of women (even without sophisticated analysis), absolutely comprehensive collections on the entertainment industry, or libraries that seek to provide materials for breast fetishists should consider purchase. Not recommended for general film or entertainment collections, as sufficient, more critical biographical information on the truly important actresses who are included is available elsewhere.?Rob Melton, Univ. of Kansas Libs., Lawrence
Copyright 1995 Reed Business Information, Inc.


Orders usually ship within 2 business days. Shipping costs are based on books weighing 2.2 LB, or 1 KG. IF YOUR BOOK ORDER IS HEAVY OR OVERSIZED, WE MAY CONTACT YOU TO LET YOU KNOW EXTRA SHIPPING IS REQUIRED.